The Same Price Action Pattern as Exactly One Year Ago

The Same Price Action Pattern as Exactly One Year Ago

The Dow position didn't last for long. Unlike the intriguing entry (if you haven't followed the setup and the entry click here to read about it) the exit, visible on the picture below, was nothing spectacular. 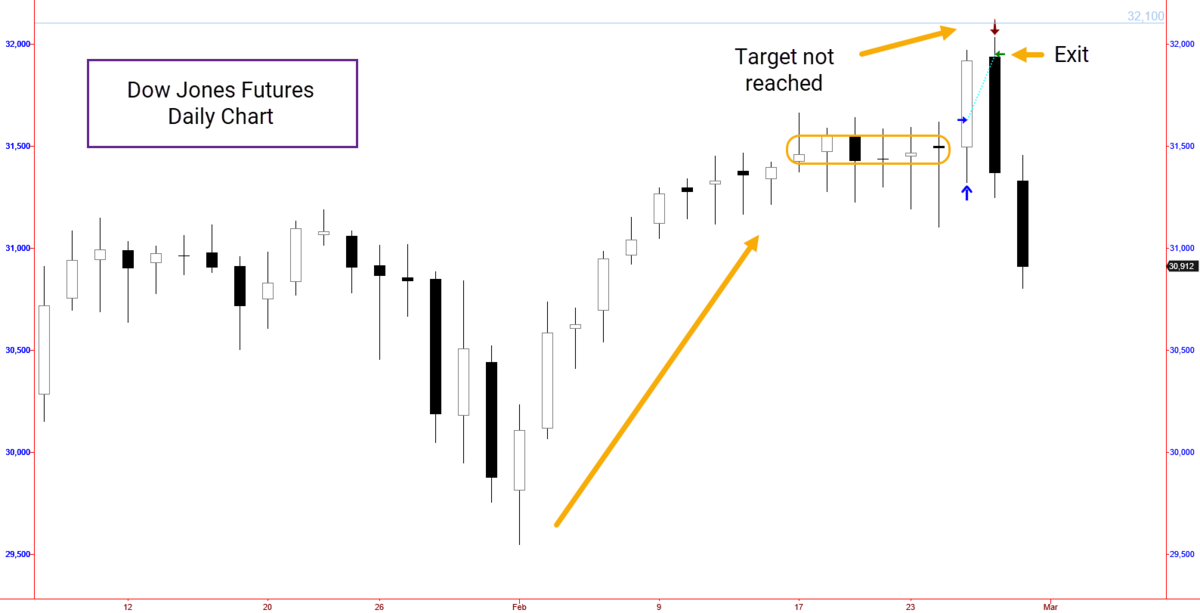 The target, also shown in the picture, was an attempt to catch more than what Wednesday's close was offering. The idea was to catch the market inertia. The target was not reached, but other short-term targets were. That forced me to exit without waiting for the target.

The decision came after consideration of the bigger picture. Such moves, a sharp rise, from the beginning of February, followed by a tight range (closing prices were almost at the same level), and a breakout in the direction of the previous move (in our case rise) usually do not last for long.

Tight ranges, such as this one (check this picture above), focus the attention of the traders because they are easily identifiable chart formations from anyone with even the smallest experience in technical analysis. Following this line of thought, such a breakout up was expected to force many people to enter the market. Something that later turned out to be a trap.

But most of all, I decided to close the trade early was because the REAL close of Wednesday was almost at the highest price reached for the day. That made Wednesday's candlestick a No Nose, and you already know what The Talking Chart explains about that shape.

Now, Dow has lost its advantage as being the strongest of the US stock market indices. So let's instead focus on the S&P500.

The last two days are down Long Body and Long Tail. This pattern, if backtested, suggests a continuation for the move down, especially if the low of Friday is reached. A similar pattern led to a huge decline, EXACTLY one year ago, when Covid-19 hit the markets. You can see it in the small screenshot inside the next chart or open your charts and go to the end of February 2020. That particular combination was also explained in the book.

Obviously, now the fundamental situation is different. History does not fully repeat itself so let's see where might be the difference. Even if we see a break above Friday's high, which would be a difference. the first target would be around 3870, and that will be a very bad risk-reward. The upside scenario needs a higher short-term low or a complex signal to create something worth trading.