Learning when being wrong! Wheat with short-term COT pattern

Learning when being wrong! Wheat with short-term COT pattern

Some say the market is cruel. It is just waiting for you to make a move and goes against you. But it is not always like that.

If you recall from the last week's post, I was bearish on Swiss Franc and Euro and bullish on US Dollar. As it was written in the blog post, I've picked the Euro as a vehicle for this trade because it was comparatively weaker. 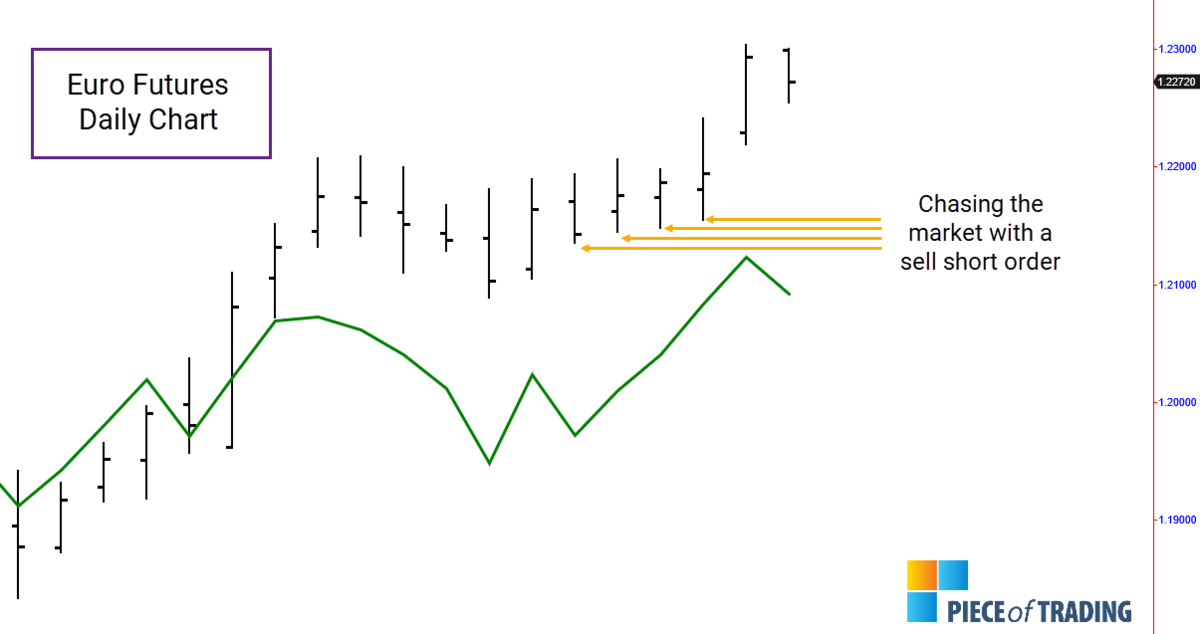 I've placed a sell short order below Friday's low, then below Monday's low, Tuesday's low and lastly below Wednesday's low. As you can see, nothing happened. The Euro was moving only up with no attempts to trigger my order. Having in mind that I was wrong in my expectations for a decline, we might conclude that the market is not that cruel after all :)

Besides the lesson of how Mr Market might save us some bucks maybe we should focus on why I've continued to move my entry order higher and why Wednesday's low was the last day.

Why it was placed below the 2xT was explained in the last week's post. Monday's price action went above Friday's high but then distribution started and the day finished as a 1xN type. According to The Talking Chart, this shape shows bias for the next day to go in the opposite direction in 54% of the cases. Plus the previous top was not breached and the accumulation was not picking up.

Tuesday ended as an up inside 1xT day. As stated in the book, this shape is expressing a very strong continuation bias. A strong bias that I've decided to ignore. I know, I know, I should reread my own books :)

I've realised my mistake when the next day broke above the 1xT high. Wednesday's price action broke above the previous top but then immediately went down, closing as a 1xN shape.

Now, this is a key moment. The previous 1xT was strongly suggesting an up move, but it has happened, right? The next day was up with almost one full 1xT's range. Then it closed as a 1xN. Since this was the last day, it was also the most important. As such, it suggested, with a 54% probability, that Thursday had to be a down day. That made me keep my order active and move it below Wednesday's low. Breaking to a new high and immediately collapsing after that was looking good as a short scenario.

But Thursday put the end to all of this when the price gapped up and broke above 1xN's high. Such a breakout was expected to lead to a continuation, in 78% of the cases, and the Euro lived up to those expectations.

Wheat is approaching a period of a seasonal decline (starting from 21th of December). At the same time, the grain is making a short-term bearish COT pattern (learn this pattern here). A little disturbing is the fact that the Small Speculators (red line, below the chart) are net short because they are usually wrong. But if we look more closely at their position we'll see that they have been net short for quite some time and the exposition has not changed much in the last months. That is why it is reasonable to ignore them, at least in this setup.

From a price action perspective, we had Three White Soldiers. If you are using this pattern I strongly suggest you read this article. It is a research I did not so long ago about how this pattern is not doing what it is supposed to. And here the same thing happened, instead of continuing up, Wheat remained in a tight range during the past week.

What is interesting is that during that range the On Balance Volume (green line) is going down. That suggests a distribution is taking place.

Now, that price can make a lower short-term high if on Monday it breaks below Friday's low (1xN). That should lead to a continuation downward with a 78% probability. Targets somewhere in the 572-574 area.