Shall we buy Chocolate with Australian or Canadian Dollars?

Shall we buy Chocolate with Australian or Canadian Dollars?

A short-term sell setup appeared in the latest Commitments of Traders (COT) data in both Australian and Canadian Dollar futures. If you are a Forex trader, that means sell setup AUDUSD and buy setup in USDCAD.

Let's look at them.

As you can see from the chart above, the Canadian Dollar is making new lows and is not able to reach new highs. That means it is weaker compared to AUD, making it the better choice when it comes to taking short signals.

So let's focus on it.

Comparative strength is not the only reason why the CAD should be preferred in this situation.

The COT data is also showing that small speculators, a.k.a the crowd, have bought the last decline, big time. Those guys have the reputation of constantly being on the wrong side. Especially when there is such a big jump in their net position (highlighted in green).

What is also important in the current situation is the fact that while the Canadian Dollar is staying relatively flat in the last 7-8 days, the On Balance Volume is falling (highlighted in orange). That suggests a distribution.

Do you like chocolate? If yes, then I have good news for you because we might witness a decrease in the price of Cocoa.

Here again, there is a short-term COT pattern, pointing down. This market is approaching a period when according to the seasonal chart (blue line, courtesy of Larry Williams), a decline can be expected. This period starts around the 23rd of September.

COT with Seasonal is a good combination, but something else grabbed my attention.

Look again at the Cocoa chart. One of the bars is highlighted in orange. This is the largest daily bar we have seen in the up move so far. It starts with almost No Tail and closes near its high (almost without a Nose). According to the Talking Chart book, this bar is a 0T shape or even can be considered as a 00 shape.

Being of such shape means a pause or a correction should be expected next. But since it is the biggest bar from the move so far, with the largest volume that, at least in theory, might mean the end of the whole move. It is similar to the Crude Oil situation we've discussed in the previous blog post (Free price action course inside).

Since the low of that big 0T is not penetrated yet, we don't have a valid lower short-term high. But I've tested the combination of the last few bars and here are the results. 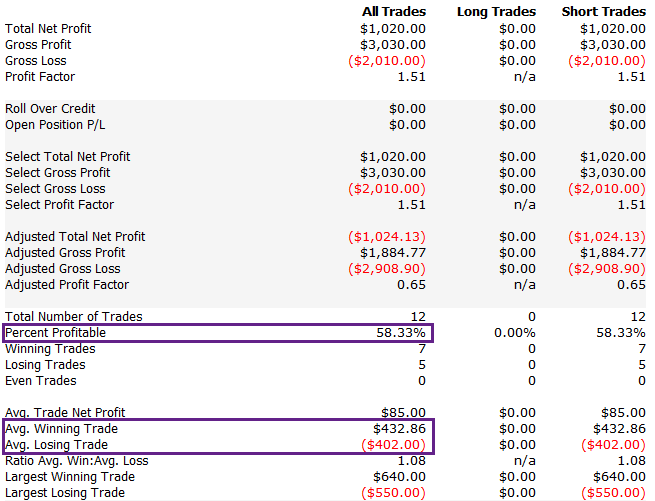 What you see is a test for the last 20 years which shows what happened every time a short position was opened, after such a pattern appears. It includes rules for stop-loss and target, which I won't discuss here because such details are not that important. What is important though is that most of the time such a combination (the last two bars) in the past led to a decline.

All of this could lead to a short-term decline in Cocoa. Probably not big enough to make the chocolate cheaper but still a good trading opportunity.

I wish I could say more about the US indices. Nasdaq has presented us with a short-term bullish COT pattern. I am still in the bullish camp and I'll be looking to take long signals but to be honest, I can't see any signals at the moment.