The Stock Market correction begun. VIX has doubled.JPY with a good opportunity

The Stock Market correction begun. VIX has doubled.JPY with a good opportunity

Back to the ideas mentioned in the previous blog post. If there is a complex signal forming a lower short-term high in Wheat I'll take it. But that high volume day (Tuesday, September 1st) might also represent strength so we have to be careful.

So, the correction in S&P500 came as expected. If you used some of the suggested ways to attack the situation through VIX, congratulations because VIX doubled its price since last weeks post.

What's next for the stock market? I don't think what we see now is the end of the bull market. The market should remain above the recently reached all-time high levels at least until the US elections. But is the correction over yet is hard to say. A lot of lows were taken out so a higher short-term low is reasonable to expect before the uptrend will resume.

An interesting situation is forming in the daily chart of JPY. From a short-term perspective, I think it reasonable to expect it to go up. After that huge outside day (highlighted in orange) the prices stood in its range for some time. Now, we have a very good combination that may lead to the formation of a new higher short-term low.

The combination explained with the terms mentioned in The Talking Chart book is as follows:

Now the interesting part. If we combine those and backtest it for the last 10 years we'll get the following: 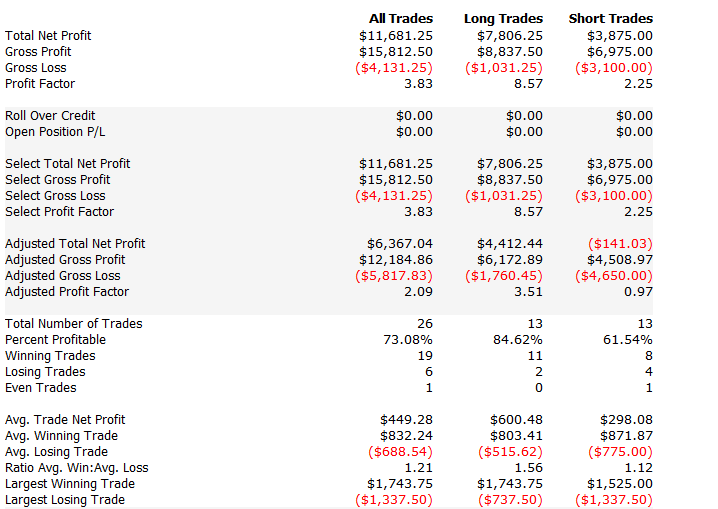 As you can see in the last 10 years there were 26 appearances and if include this pattern in a strategy (with stop-loss, targets, etc.) 73% of those cases were profitable. What's even more interesting is that long signals perform better with 84% per cent profitable. That is good news because I am expecting next week to see a long signal.