Can an Indicator be Wrong? British Pound is Getting Closer to the Short as Are Some of The Grains

Can an Indicator be Wrong? British Pound is Getting Closer to the Short as Are Some of The Grains

The British Pound looks more and more set up for a decline. Besides the seasonal chart, the decline is also suggested by the Commitments of Traders data which is showing that the Commercials have increased their shorts big time during the past week. Still no distribution according to the OBV. But the indicators can be wrong. Especially this one because at specific moments it wrongfully interprets the rising volume as an accumulation.

The key moment from the past week is the Tuesday bar when the price action can be interpreted as a No Tail No Nose bar. This 00 bar has the size, has the volume and it breaks above the previous top. But, and this is a big BUT, its low was penetrated on the next day with an outside bar. Then another outside bar appeared on Friday. I'll be looking for short signals here.

Last week short-term COT setups appeared in Corn, Soybeans and Soybean meal. All setups suggest a down move. The weakest of them is the Soybean Meal.

Strong move up, upcoming seasonal weakness, COT setup and a very clear distribution, the only thing we need for a good short signal is a lower short-term high. Let's see how the bars will be arranged on this LH because it can turn out to be a very good opportunity.

I've tested the combination between the last two bars on E-mini S&P500 futures for the last 20 years. Depending on different stops and targets the double 1xT bar combination is showing between 56% and almost 70% winning trades, making money in all tests. See the table below which is showing one of the combinations. 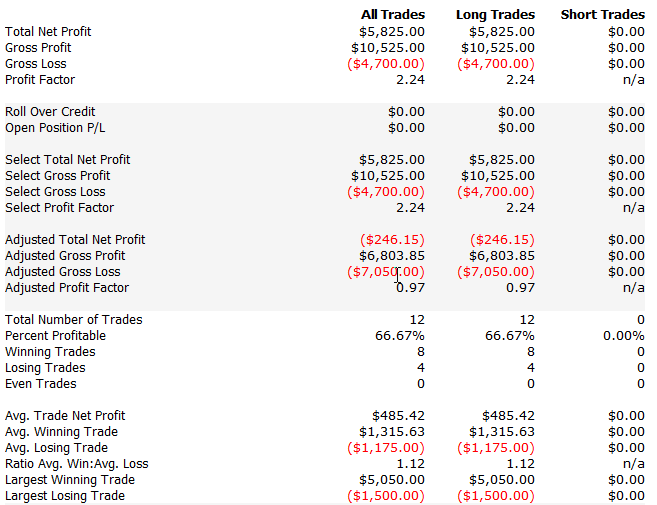 But this combination is very rare. Only 12 trades are not something we can consider as statistically significant (not to mention other problems).

So the last two daily bars are bullish but be careful. Also, the advance-decline line is falling which is not a sign a healthy rally.