Lesson #5. A Few Things Nobody is Telling About Price Action Patterns

Lesson #5. A Few Things Nobody is Telling About Price Action Patterns

In trading, only a few things are more important than knowing that what you use is working!

Knowing that makes you confident and:

But what is necessary to achieve that? How to know if something is working?

There are two ways: backtesting and logic.

Note: I am not including results from real trading, the ultimate proof, because in this example is about learning something new, maybe a pattern, which you intend to put into practice.

Backtesting means to check how such a pattern performed in the past. This can be done by coding the rules or simply by taking a pen and paper and doing it by hand. Logic, on the other hand, is not always possible to understand. At least not in the beginning. Usually, it takes some time and requires in-depth market understanding to fully understand the logic behind a pattern.

The best situation is when you have the backtesting results and logic both supporting the pattern. If it is bullish, both logic and backtests must confirm that. If the pattern is classified as bearish, then again logic and test results must back up the bearish idea.

Now you probably think that “yes, of course, everybody has to do that”, but let me ask you if this is true, why nobody is using it?

It is amazing how traders continue to use patterns, because of their fancy name or because somebody made a video on Youtube explaining how good that pattern is. They are using it no matter the fact that the effectiveness of this pattern can not be proved, nor by backtesting results, nor by logic.

I don't think this pattern needs explaining because of its huge popularity but let's summarize it: 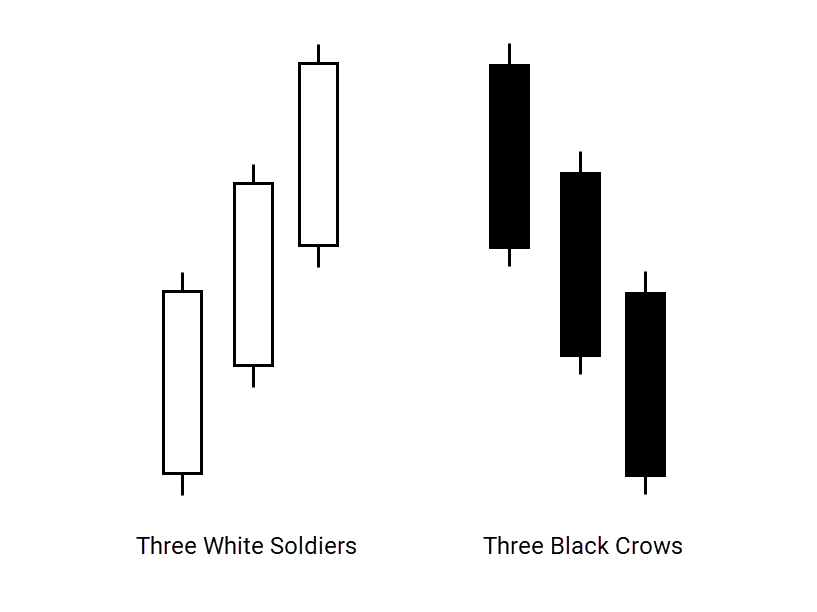 Let's exclude the gap because I doubt we'll find it anywhere else outside of single stocks or ETF's
.
So how do we know it is working? Because it has a cool name? No, we follow the steps discussed above.

First comes the test. Since this pattern is on a “mission to help” the retail traders let's test it where the majority of retail traders can be found – the Forex market. I'll use here the Euro Fx futures as an attempt to give the gap condition a second chance. Also, Euro futures will give more honest results than a CFD based on EURUSD. But anyway the difference won't be that big as they make almost the same moves. You can expect the same to be true about your EURUSD instrument.

I've tested the daily chart of Euro FX futures for the last two years. I couldn't find any combination, the same as the original Soldiers or Crows. However, six were close. From those six, only one made what it was supposed to. 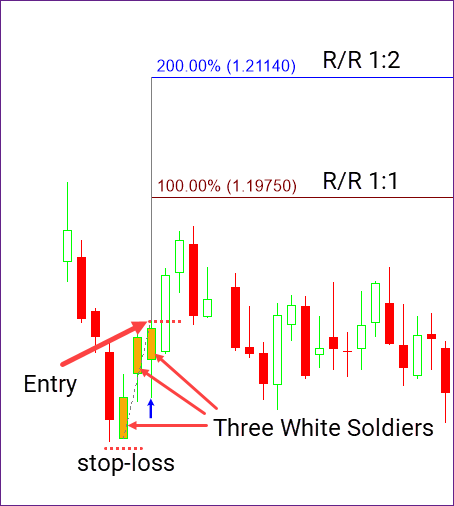 Only one led to a continuation in the direction of the three white soldiers. That's almost 17%. In the other five cases, the market either made a retracement after the third candlestick or started moving sideways.

The problem is even bigger. In that situation, where the Euro made three white soldiers, the move after the pattern wasn't big enough to reach a reward equal to the risk which had to be taken (check the above image)..

But since we are testing here let's loosen the conditions a little bit and test the idea behind this pattern, that three consecutive candlesticks mean serious buying and selling which has to continue.

Here is what happened after those Soldiers or Crows:

Now, this is interesting!

With all rules set aside, after three consecutive candlesticks in one direction, we can expect a continuation in 16 of 55 cases or 29%! Only 29%? Yes, and we won't be able to make much money based on this pattern. Because again the problem with the bad risk-reward appears. So if we follow that pattern we'll make money in 29% of the time, but that money on average won't be more than what we've risked.

Not good, right? But why this pattern is failing and what about the logic part?

Logic could shine more light on why it is happening. Let's check it.

Buckle up because this is something you won't see anywhere else!

Like we've already said the original idea is that the three white soldiers/black crows mean heavy buying or selling. But who is doing that buying? Let's see another example. 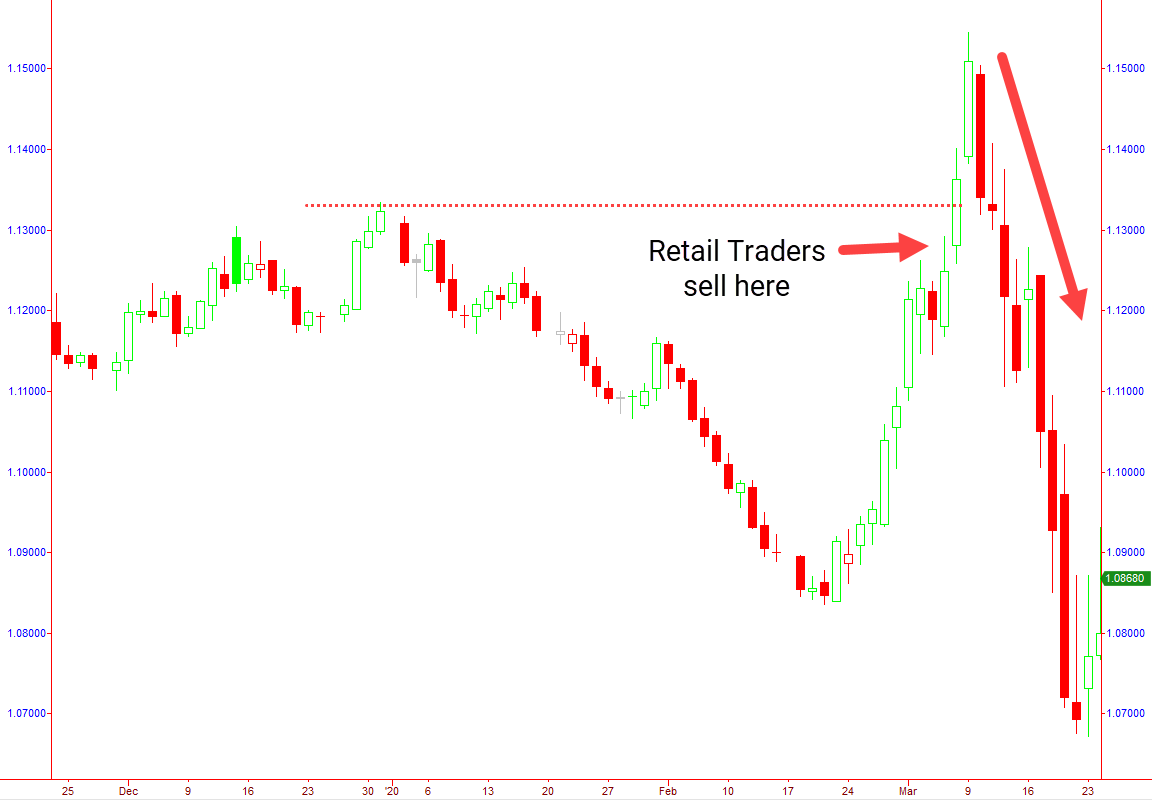 Three consecutive equal in size, rather large, candlesticks, that's probably not me and you buying or selling here. I don't want to offend anyone but it just doesn't look like retail traders are selling here.

Second, retail traders can hardly make the Euro drop from 1.1500 to 1.1100 in three candlesticks.

So if not retail then who?

This is the footprint of some large players like funds, corporations, etc, who is placing a large position.

But to place a large position you need a market maker (MM). To be able to achieve a good price you can't just hit the sell button with a few billions. You need to work with the market maker so they can provide good execution and be able to hedge their own risks.

And this is the reason why after three consecutive candlesticks it is most likely to have a pause or a retracement. Because part of that big position is executed and now to place more contracts both the MM and the big player need to be sure that there is a counterparty. In other words, they execute part of the position then wait.

That is the reason why this pattern is failing most of the time.

But trading is a very interesting business. We can throw that pattern in the trash and never look back, but in that case, we might lose valuable insight into how the markets operate. Trading is also not a business for haters, it is about making money. 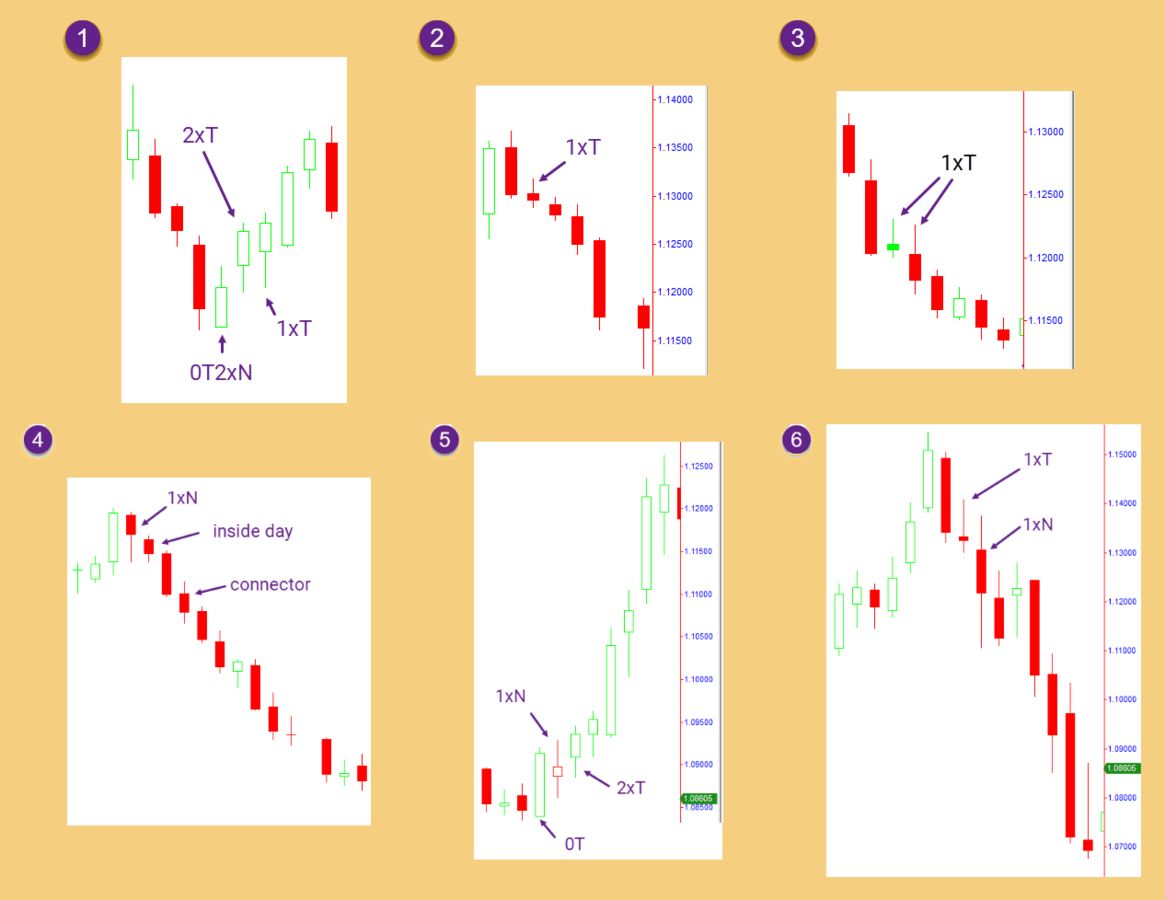 The picture above is showing some of the winners, the 29 % where three consecutive up/down candlesticks led to a continuation. These charts are from the tested period of Euro Fx futures.

Is it possible to know when it will continue and when not? Can we make this pattern work?

What you can see is that the first three candlesticks are not equal in size and shape. All types of candlesticks are fully explained in The Talking Chart book and your price action checklist but in this case:

You would probably need to read this more than once because it contains a lot. As always study the examples, go and find other similar situations on your charts and see how things work.

This lesson is part of a Price Action education series If you want to see the other lessons, please subscribe here. It is FREE.

Next, we'll take a look at one thing we didn't mention here and which is crucial for the successful price action entries

Thank you for taking the time to read this.