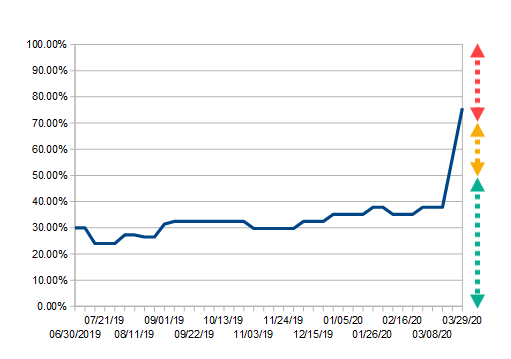 With the western world now breaking the records of people infected with the coronavirus and half of the world under some form of a blockade, the recession indicator reached 76%.
That could mean that the USA might be already in a recession. And with the USA recession in the whole world.

Of course, this could mean more opportunities.

The key moment now is that QE Unlimited which the Federal Reserve has started. That along with the fiscal stimuli from the USA government and the massive stimuli from other countries could mean a few things:

So what to do?

With the current FED and government actions, it will be very hard for the market to continue the downfall. But the coming week a lot of fundamental news is expected which will most likely be very bad. That in combination with the fact that the USA is in the steepest part of the infected people curve might lead to a down move to test the low from one week ago.

Anyway, I am searching for individual companies (avoid ETFs), blue-chip stocks that reached good valuation metrics where I am planning to enter with options.

From the price action perspective if we could see a higher short-term low in the US stock indices that would be very bullish and I'll be searching for complex long signals.

From the price action perspective we are still in the range of the biggest down day (03/18/2020). Which is closing at its low. That suggests bullishness. Accumulation is suggested by the divergence between price and the On Balance Volume.

What makes it even more interesting is the fact that we are making higher short-term lows inside that range. Friday's high is a bullish level which if broken will create a second short-term low higher than the previous. If before that we see stop-loss hunting below the orange line the bullish scenario will get stronger. I'll be looking for long signals but like I said before only short-term.

By the way, I have finished the writing of my book about Price Action Trading. If you like such kind of analysis this is something you would want to read. More info on his later.