I was wondering how to start this search? What can make the price of an instrument to go much higher or lower in a single day?

There are some obvious answers like news, for example. New information will definitely move the markets. But are all large-range days made by the news?

We'll cover how fundamentals affect the creation of big movements in a later step, but now we need something different, something unexpected.

And it is the Relative Strength Index or RSI.

Developed by Welles Wilder in 1978, RSI is a momentum indicator which measures the magnitude of the recent price swings. It moves from 0 to 100, with three separate zones:

There is one more level we should include here, and it is the 50-level.

Now after that short and probably unnecessary (having in mind that this is one of the most popular indicators) description, you might be wondering how can RSI help me catch the big day?

I am curious about the same, so let's dive in.

Since we are trying to find clues which will help us expect a wide-range day, we must make one quick but at the same time significant change in RSI's parameters.

By default, it will appear on your chart calculating 14 periods (days). I am afraid that this might be too long for our research. So instead let's lower this parameter and set it to 4, four days. The credit for this lowering of the indicator's period to 4 goes to Larry Williams. This is something I've learned from him.

We must pick an instrument and define what we'll identify as a wide-range day.

Let's focus on S&P500. It is one of the most widely accessible trading instrument. It is being traded from everybody from scalpers to long-term investors. That makes it the perfect instrument, to begin with.

To define the large-range, we'll use another popular indicator Average True Range or shortly ATR. This indicator's parameter will be set to 1 to calculate every day separately. The wide-range day would be every day when ATR(1) is above or equal to 50.

With all those things on the chart of E-mini S&P500 futures, it looks like this:

Don't worry that I am using futures here. The futures daily chart won't differ much from the CFDs chart of popular brokers. You should be able to see what I am seeing.

All is set and we are ready to go.

How to approach this situation?

One way is to formulate some hypotheses and then try to prove them. Like for example: “Wide-range day should start either from overbought or oversold zones. Because there is where the market is exhausted and profit-taking might occur”.

The other is to put our hands into the muddy water and see if we can catch a fish.

In this situation, I'll choose the second approach following some logical steps. Thus if we find nothing, all those efforts will increase our understanding of the Relative Strength Index.

“The game is afoot” - Sherlock Holmes

We can divide those 104 bars into two categories:

Here is how they look: 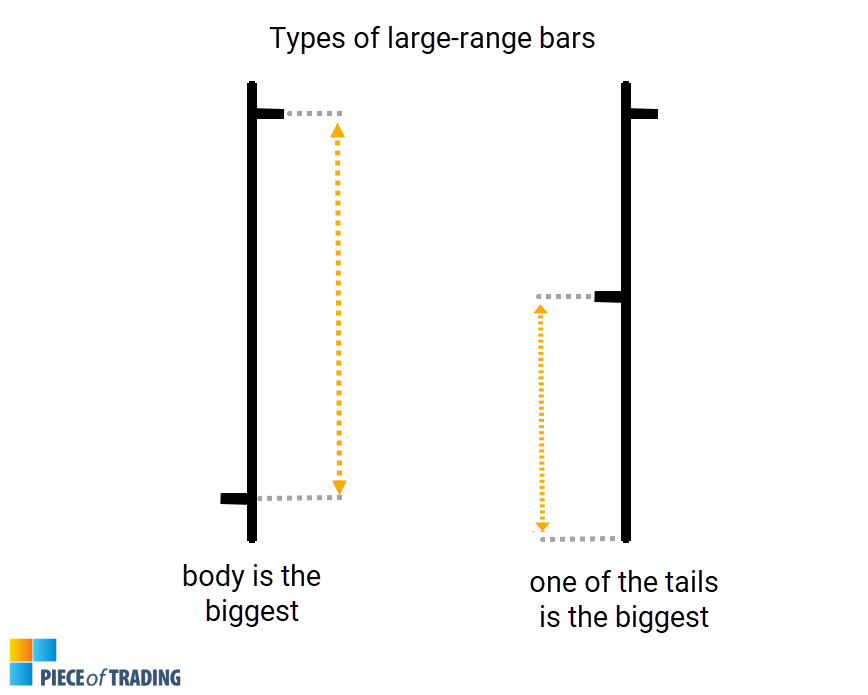 We'll cover those and other types of bars when we search for the volatile days using Price Action Trading. So this is one more reason to sign up for updates, and you'll be notified when this research is ready.

The first one, where the bar's body is the biggest occurred 62 times. In the other 42 occasions, the body was not the biggest.

Since Relative Strength Index has three zones the next logical step is to see where those large days appear compared to the RSI zones.

We can have two options. The bar to be located in only one of the RSI's zones or it might start in one and finish in another.

The table below is showing the results:

What is immediately obvious is that no bar, no matter how big it was, could cover all three zones.

Next important thing to point out is that most big bars occurred completely outside of the zones where the market was overbought or oversold, according to RSI. Most of them occurred when the Relative Strength Index was between 30 and 70.

Now, you might say that it is because this zone is the biggest. Extreme zones are with length 30 while the neutral is 40. But even if combine both overbought and oversold zones together it is still less than the result for the neutral one.

There is one more thing. Since we are digging into trading data, we must always have in mind that there are traps inside. Traps like the case here. We observe past data where the days are closed and fixed, and RSI was drawn on their closing price. This means that if during the day RSI crossed from neutral to one of the other zones and then come back we won't see it on this chart.

So from those 37 bars which we see completely in the neutral zone of the Relative Strength Index, there might be some which had crossed into and overbought/oversold zone and then come back. And those should be the ones with bigger tails.

As you can see from the results, 16 wide-range days have big tails. Probably some of them have reached the extreme zones and met accumulation/distribution, which made them turn back.

But no matter the limitations (those we know of and those we don't know) there is something here.

We don't know where the highs and lows of those big days were, but we know where those volatile days had begun!

What I mean by that is that the close of the previous (before the volatile day) bar is fixed, along with the value of RSI. So at least we know the starting point. This is very important because to anticipate big-movement days we need to know where they start.

This is telling us that 37 large-range bars started inside the neutral zone. But is that all?

No, of course not. Those are only the days which were fully positioned in the RSI's neutral zone. But if you go back to the first table above, you'll see that some volatile days started in the neutral and ended in either overbought or oversold zones.

Let's now divide those 104 big daily moves according to their starting point.

In ~57% of the cases or 60 days of the 104 large-range days started from the neutral zone. That result is statistically significant.

It seems that we've found something.

Most of the time the large-range days start when the 4-period Relative Strength Index (RSI) is in the neutral zone, between 30 and 70.

So, the next time you are in a position or about to open one, see where the four-bar Relative Strength Index is. Because if in the neutral zone there are higher chances to expect that day to be a large range day.

You are probably thinking that 60 days out of 504 is not much. But in trading, many small, at first glance advantages can lead to a big increase in profits.

Also, don't forget that we are at the beginning of this journey to find the large-range day. And it is only RSI. There are plenty of other tools which we'll research further to find what causes those volatile days and when to expect them. To sign up to get updates on how research is going click here.