S&P500 did a fake down move on the first trading day after the holiday as it was suggested in the last week's blog post. After that, it reached a new all-time high. But there was no follow-through and the up move stopped there.

Then came the correction. So far we have only one outside bar to the downside. And the question is can it go lower? 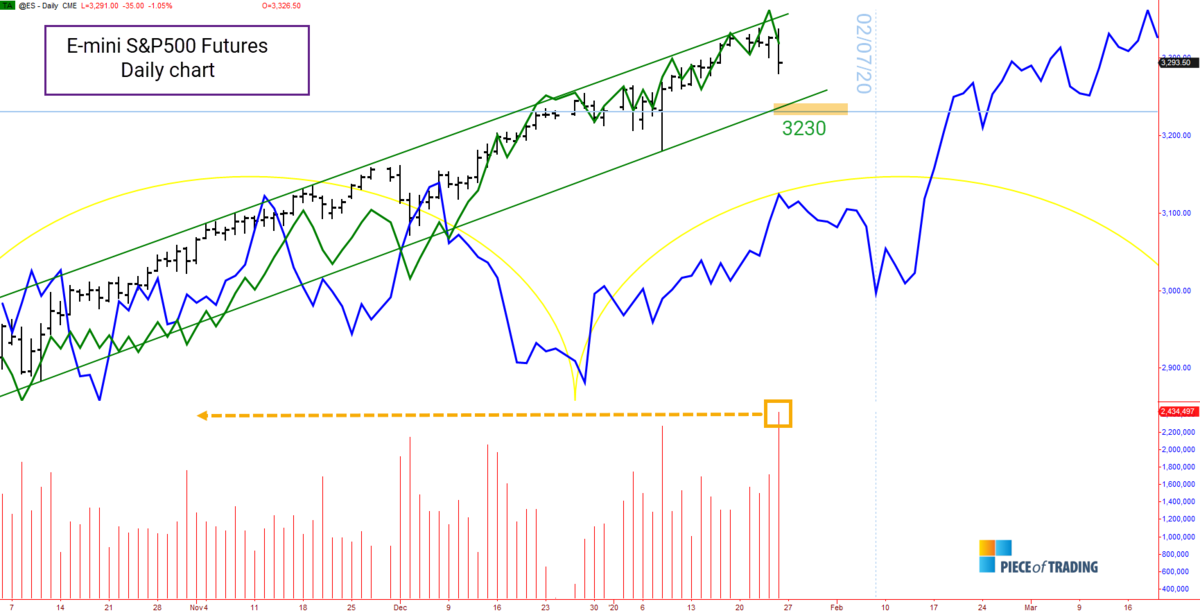 In the past, such outside bars have marked the start of corrections leading the prices lower. But it is not a sell signal which is worth taking. At least not for now. If a lower short-term high appears and markets internals are still dropping then hitting the “sell button” would be justified.

But how low can it go? Assuming the down move will continue the prices might go to 3230 area. Judging by the seasonal indicator (blue line, chart window) we could see that such a down move should end somewhere at the beginning of February.

Something else is worth mentioning is that the recession indicator hit 38%. Which means 38% chance of having a recession in the USA in the next 6-12 months. That is the highest reading so far. That is interesting because the probability is slowly rising no matter that the market is moving up.

Also, it is against the probability measured by Bloomberg. Their recession indicator is showing lower and lower probability. Now it is standing at 26% chance of a recession in the next 12 months.

No matter the difference, both indicators are a long way from the dangerous zone.

So what would be the strategy here?

For now, I'll be looking to be a buyer. Look again at the chart. The green line is On Balance Volume, and it is showing that S&P500 futures are not showing signs of distribution. Also, the volume (the pane below the chart) saw a big increase on Friday. Being in an uptrend with no recession in sight this is a configuration which can lead to a continuation of the up move.

An interesting situation from an educational point is developing here.

From one side Platinum can be considered as set up for an intermediate-term decline. According to Commitments of Traders data, Commercials'net shorts have reached an extreme. Now we are approaching a seasonal top in February.

But in short-term things are very much mixed. 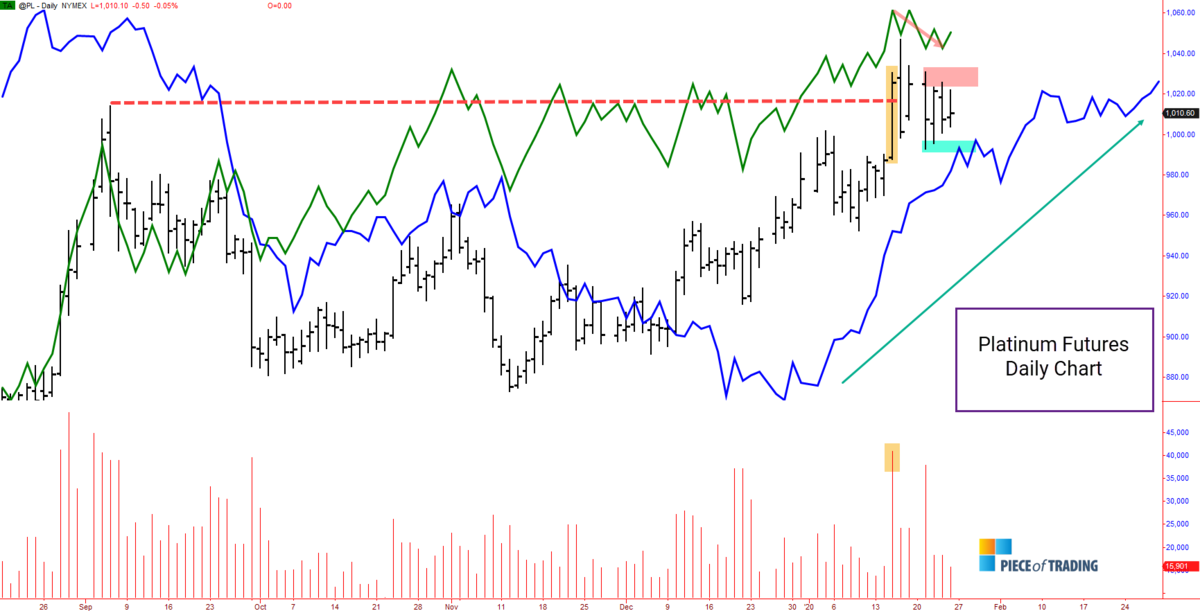 Let's begin with the seasonal chart. The seasonal top is approaching, but it is weeks ahead. And till then the direction according to seasonals (see the chart, blue line) is up.

On Balance Volume (green line, chart window) is showing a sign of distribution but again nothing significant. A single strong up day might erase those signs!

On 01/15/2020 Platinum broke above the last significant top (09/05/19) with a large range day and significant volume. That is usually a sign of continuation. But there was none! Immediately, on the next day, the market fell. By doing that it marked the low of that big volume wide-range day as the significant point for further decline.

That important point of support has changed into the low of 01/21/2020 where Platinum saw buyers coming in. The high of that bar is also important. No wonder that the price action in the last three days remains inside the range of that bar.

If we want to be more precise, by reading the chart we can conclude that the major level for the downside scenario is the low of Thursday. As for the important resistance, I think it stays the high 01/21/2020.

So it seems that we can play this instrument in both directions! Is it wise to trade something where you don't have strong feelings about the direction?

In short-term sometimes it happens. If our risk/reward is good enough, we can trade it.

And that is what I will do. There are a lot of orders placed around both sides of the current range. Hitting those liquidity areas and market reaction there will provide more insight on how this situation will develop. We must closely watch this instrument.

Monday should start with up move aiming at Friday's high.