Short-term and Swing COT patterns in Sugar and Japanese Yen. Will the SPY continue its trend?

Short-term and Swing COT patterns in Sugar and Japanese Yen. Will the SPY continue its trend?

Sugar is showing a rare combination between short-term and swing COT setups. Both setups pointing to the downside. All this is happening after we had a sharp rise before a coming seasonal decline. All this made Commercial's selling reach its lowest point for almost three years. 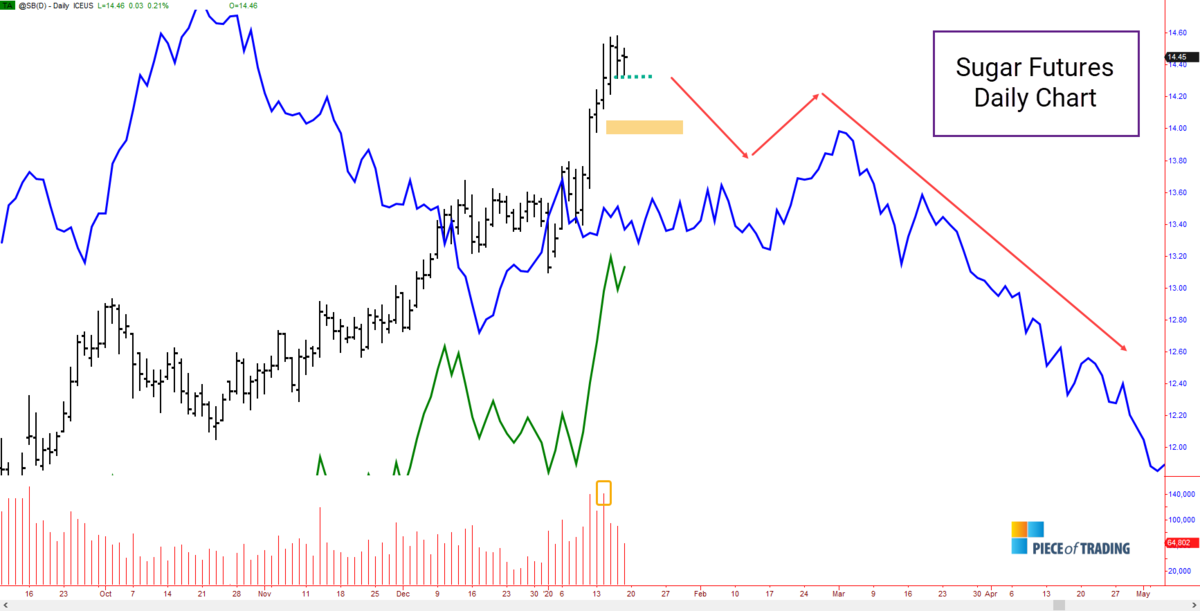 Now it is too early to think of catching the swing move. There is no fulcrum around which the down move might form. But let's see is there enough evidence supporting the short-term one?

The sharp up move we saw last week created a stopping volume. after which signs of distribution appeared.

Now, the price action trading perspective. The last two bars suggest that a break below Thursday's low will increase the probability of a short-term decline. The methods of searching for the big move suggest this decline might be explosive. But it is better to put as first target the area around 14.00.

There are two major obstacles here. First one is the fact that this short is against a strong uptrend. The second one is that Monday is a trading holiday - Martin Luther King Jr. day. ICE Sugar No11 futures would be closed on Monday. That questions Tuesday's price action. We have to be careful.

Another short-term COT pattern appeared in Japanese Yen during the past week. This time it points to a possible up move. Again, like in Sugar's case, it might be a little bit early for that.

Japanese yen futures have reached a major support zone. My work suggests that the immediate target for this down move is 0.9050. This level is not yet reached.

Except for seasonal indicator (blue line, courtesy of Larry Williams), nothing else is backing a possible rise.

My strategy here will be to wait for a complex signal. If the Japanese Yen holds on those levels, even without reaching the target level, I will look for the buy signals.

The 3300 target, suggested in the last week's blog post was hit on Friday. Reaching targets and a trading holiday on Monday made me close my position from the last week.

But still, there is no sign of recession. The recession indicator is holding on 35% which is the highest level reached so far. But it is still away from the dangerous zone.

There are no significant signs of distribution which suggests that the uptrend could continue towards 3350 and then 3500. However, the sentiment continues to be skewed to the one side. That is normal for such market situations. But can cause a quick drop with the proper catalyst.

Such a catalyst can be the impeachment process in the Senate which started last week.

My strategy will be to continue to search for buy signals. Especially on Tuesday, the first day after the holiday, when a fake move might appear.