The latest Commitment of Traders (COT) focused my attention to Platinum. The reason is the appearance of my short-term COT setup. It points out the opportunity for an up move.

Look at the chart below. 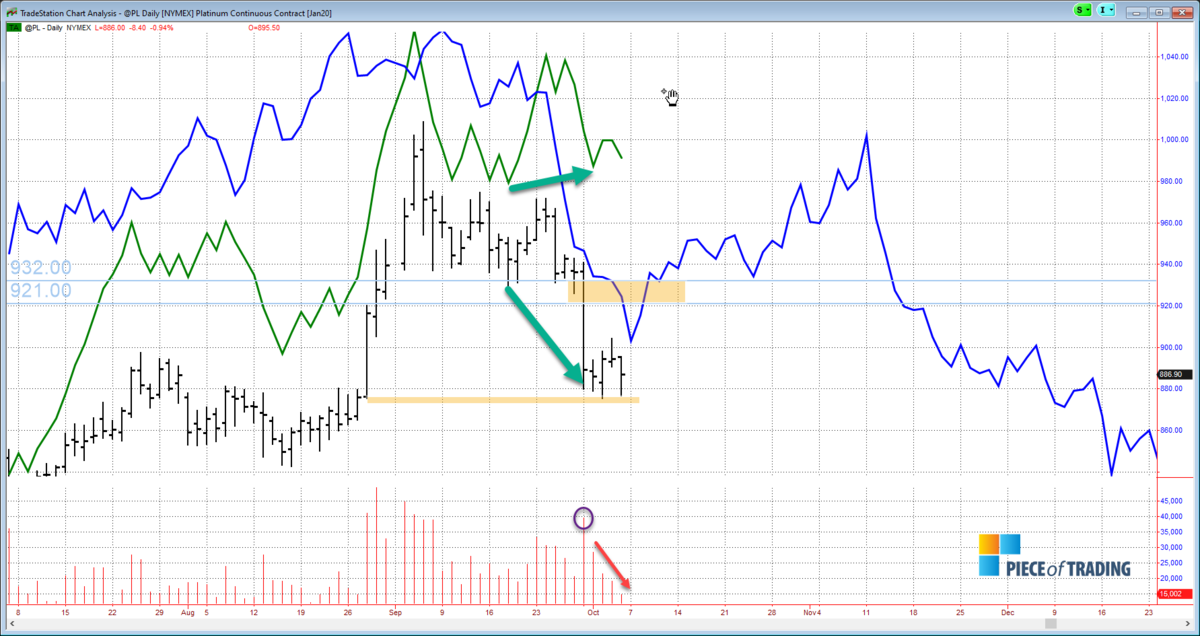 That is backed by the Seasonality (blue line) showing that right here, right now we can expect a bottom.

That big down day was accompanied by a big volume. That doesn't mean the market will go up, but it is suggesting a pause in the down move here. That is happening now.

Now price action suggests that Monday should begin with a move down towards Friday's low (876.80). Failure to break below that low and taking out the Friday's high will hint an up move with a target the zone 921-932.

Another short-term COT setup appeared. This time in 2YR US Treasury Notes. It is indicating a possible short sell here. Unlike the Platinum setup, this one occurred with an extremely high reading of Small Speculators net position. This is the highest reading ever.

On the screenshot, you can see the COT data for Commercials, Large and Small Speculators in the pane below the chart. The red line shows the Small Specs position. 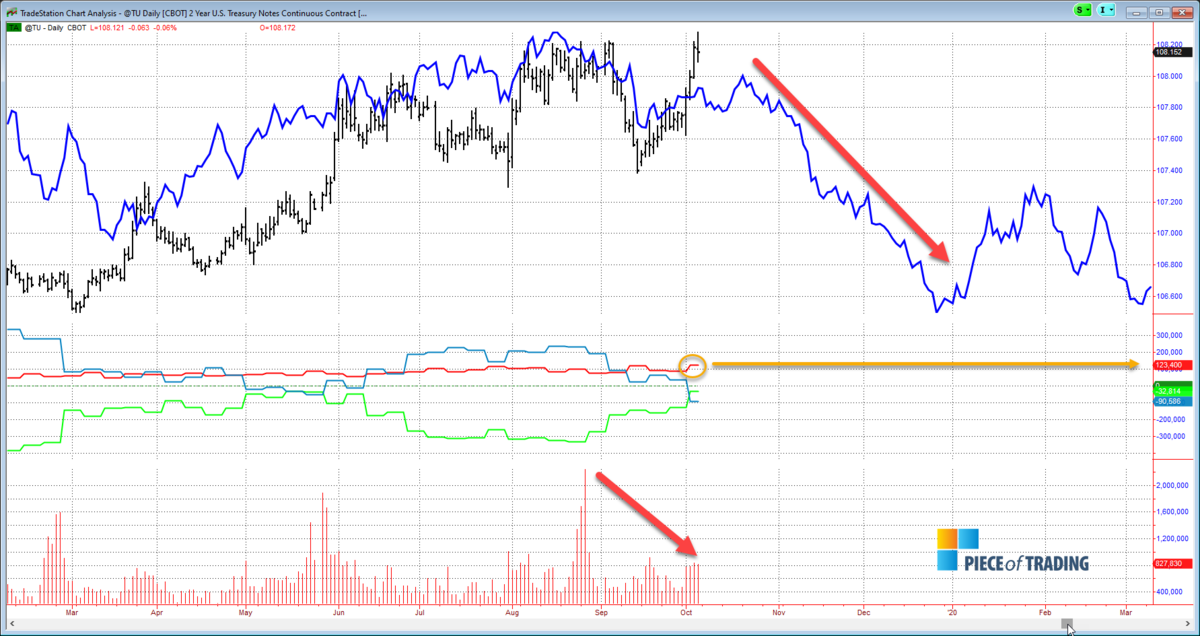 Not only they were the most bullish ever but it seems that they were the driving force behind the last up leg. They also led the Friday's break above the previous top (108.223).

Let's focus on that breakout. It broke above then returned. What is more interesting is the fact that the break above the previous top and the return happened in a single minute?!? 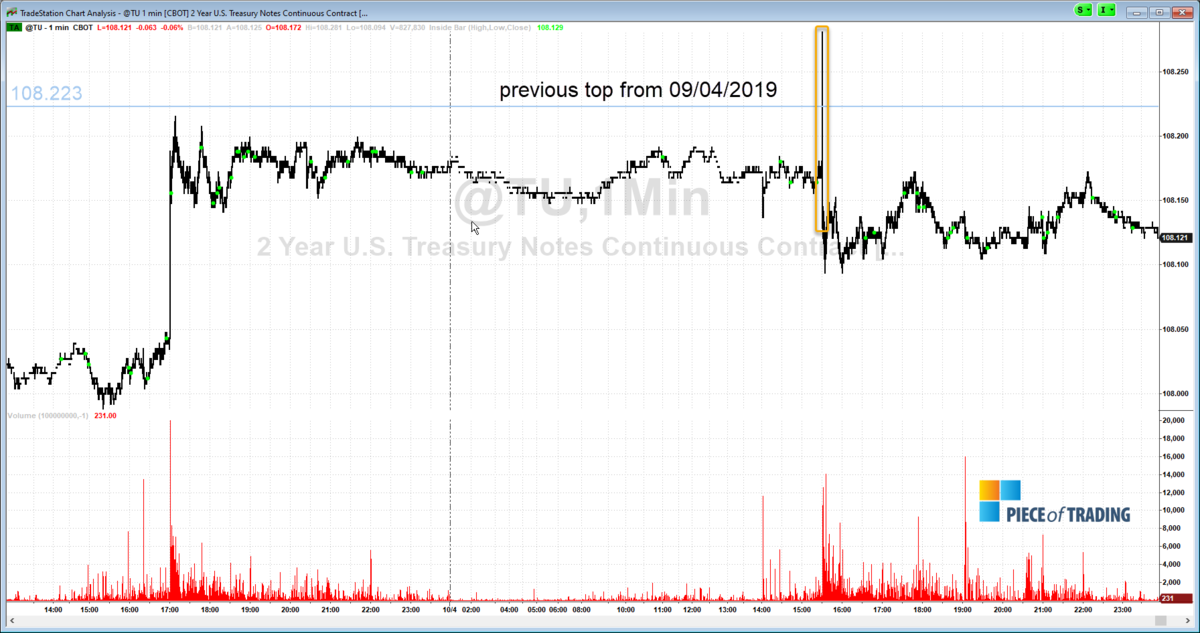 I am not sure about you but that is enough for me to put this on the front burner and look for short signals.

Soybean Meal has COT short-term sell setup as well. It occurred after the up breakout of the most recent range. The interesting thing here is that while the market was in a range for a month and a half the On Balance Volume was making lower lows. Such divergence is bearish for Soybean Meal. 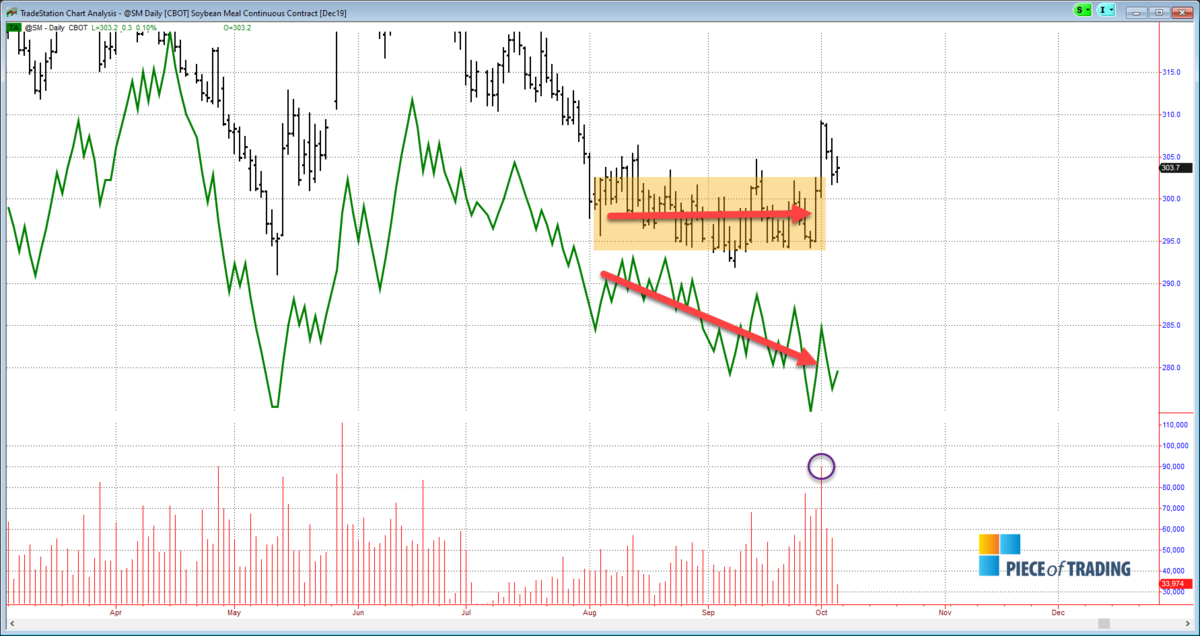 But with two consecutive large days, the price broke the range boundaries to the upside. The last of those bars is quite large. It is closing almost on its high and has a big volume.

That upside breakout wasn't registered as accumulation in OBV.

I'll wait for a lower short-term high and will look for short signals.

It looks like the very short-term direction for the currencies this week will be in favour of the US Dollar.

However, I would like to point your attention to the Australian Dollar. Here we have an opportunity for an upswing which may present many good buying points.

Australian Dollar is in the area of a seasonal bottom and there are signs of accumulation.

In the last two months, we had four similar in size large range days. Look at the screenshot below. Those bars are marked with yellow. 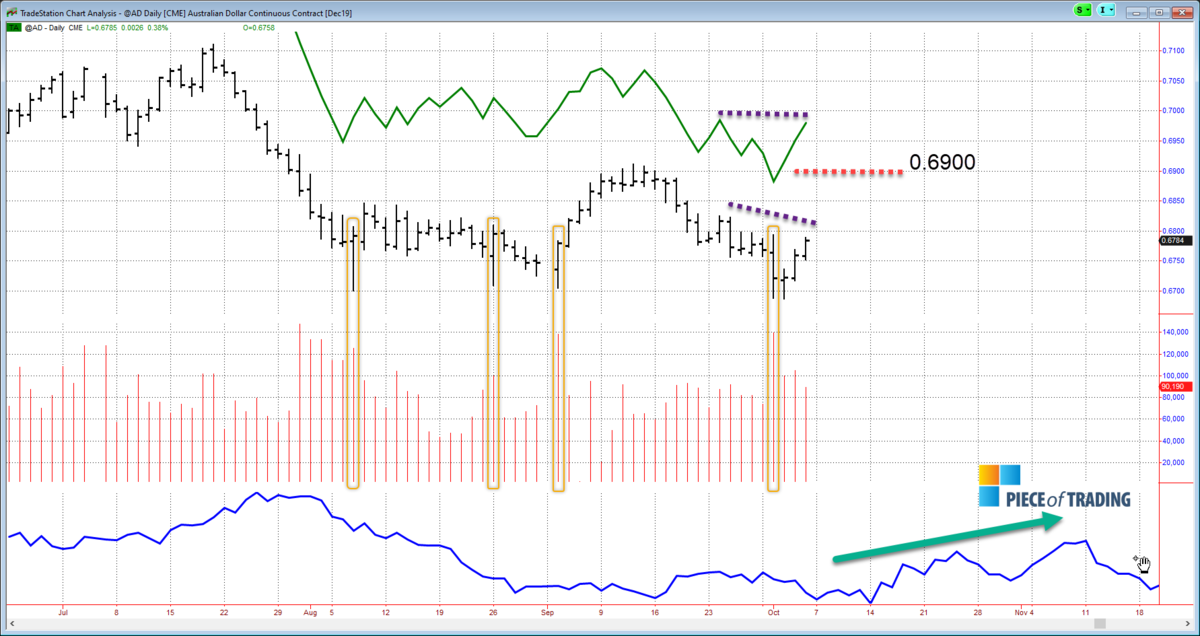 Those four bars occurred in the same price zone between 0.6700 – 0.6800. Every one of them was accompanied by high volume. Three of them were up bars while the last one is the only one which closed down.

Let's focus on the last one. It broke below the low of the other three. But stayed there only for a little. Then the next few bars retraced back to the upside. That last up move registered strong measure in On Balance Volume. As you can see on the screenshot (purple dotted line) the indicator is almost at the previous top while the price is lower.

All this is bullish for the Australian Dollar. If on Monday the market breaks below Friday's low we'll probably see a move towards the low of the last large range day (discussed above). If that low holds and AD makes a higher short-term low I'll be looking to get long with target 0.6900.

While few things are getting worse for real, there is still record employment in the USA. My recession indicator is holding in the green (safe) area showing a 32% probability to have a US recession in the next 6 months.

No matter the last steep decline the market looks strong and I'll be looking for buy signals this week in S&P500.