A lot of trading opportunities in this week's piece. Starting with Precious Metals where Platinum looks like the best proxy to take advantage of the down setup in Gold and Silver. Copper registered the biggest Commercial net buying in years. Is this suggesting that fear of a global slowdown was a little exaggerated? Ideas in both directions in currencies. Last but not least, the stock market where the fundamental analysis suggests that the “most hated bull market of all-time” may continue.

Platinum. Precious metals look ready for a pullback to the downside. Since Gold and Silver are quite strong, it won't be wise to enter against that trend. Platinum looks better. That is where I will look for a short signal. We've already seen two inside days which suggest to me that development can be expected in the next few days.

Copper. This week's commitments of traders data show that the Commercials registered their biggest net long position. One might say that this is what they do. When the market is falling, they are buying. The more it is falling the more they are buying.

But is this market really falling? Take a look at the weekly chart below.

Currently, the market is higher than the multiyear lows we saw in 2016. But Commercial were able to accumulate an even bigger net long position here. Also, there is a cyclical buy point coming in the beginning of 2020. It seems that we are approaching a buy point. Where? I prefer to wait for a higher short-term low. There I'll be looking for a buy signal.

The British pound is forming a bullish weekly setup. But the price continues to fall. Last week it broke down after a tight range where it stood for almost two weeks. 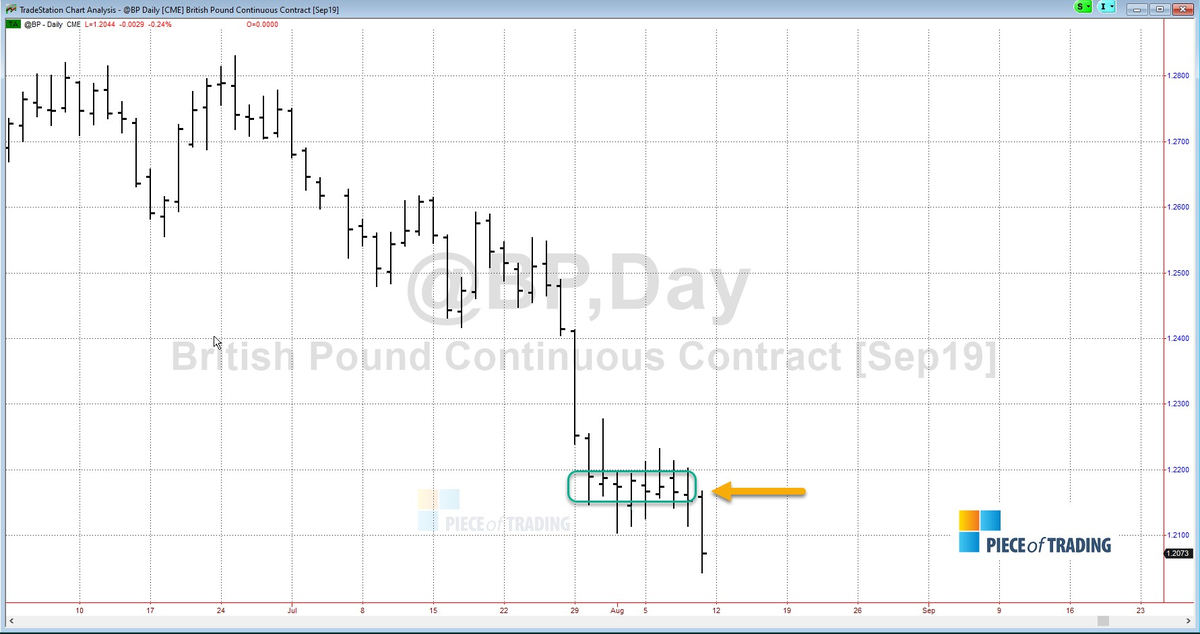 Now if the Cable can come back in the next two-three days and take out the high of Friday's bay I'll be looking to be long.

Those of you who follow the blog know about my bearishness in the Canadian Dollar. Right now this market is trying to create yet another short signal. I expect a complex signal here which will start its formation after Friday's high is taken out.

Most retail traders will run away when they hear about fundamental analysis. But most of the time it is because that analysis is considered very complicated. But like everything else, it can be explained in simple words.

Think about it for a moment why the market fell that severe in last December? Two main reasons FED was increasing rates and the USA was expected to increase tariffs to 25%

What is different now compared to the situation at the end of last year?

First, my recession indicator is unchanged staying at 27%. The USA will probably impose 10% tariffs on $300 billion in Chinese products. But this is in no way worse to what was expected back in December. And what about the Federal Reserve? Back in December, they hiked the rate and now they've corrected their mistake and brought the rates back to pre-December levels. Also, the expectations have risen for more cuts later this year.

You can play a little bit with this and try to determine how much of the last December's fall can be attributed to the FED and how much to the trade war. Then apply the same technique in the current situation.

If you do this, you will see that we can't expect a December-type market crash. Also, the market has fallen enough to consider the new trade war developments as already priced (the last down move). With more interest rate cuts on the horizon, "the most hated bull market of all-time" as Ed Yardeni described it, is more likely to continue.

But this week my COT short-term setup gave warning of a down move approaching in E-mini Dow and Nasdaq.

What this could mean is that before we start the up move, as indicated by the fundamental analysis, we will first witness a new move down or at least some form of price range at current levels.

Breaking below the inside bar from Friday might lead to a down move as suggested by the COT setup. Will it take the last low? For now, I have no reason to believe that it will.

Charts made with TradeStation. tradestation.com