* There is 80% chance of a 25 bps cut this week
* Because this is priced in mind the distribution in the U.S. Indices
* Changes in consensus will pave the path for future movements.

I am warning you, this is a long, long, long post.

If you scared of long posts or don't want to read that much please refer to the infographic below. It retells the post with fewer words and many icons and colours. Also, don't forget to check the trading ideas at the end of this post.

If you are brave enough, let's read this long piece.

All right, the next Federal Reserve's meeting is due this week. Everybody including me and President Trump are looking closely at it. You should too!

As I promised in a previous weekly piece. I will spend more time on this decision and will try to guess what it will be and how the market will react.

To do that, I turned to the person who knows everything about the Federal Reserve. I am not joking. This guy knows EVERYTHING about the FED. Things like history, policy, issues, mistakes, future policy changes, etc.. Everything which a person who has never worked there can ever get access to. He is also a trader who currently holds a position in 2YR Treasury notes.

Here's what my friend Peter said about the next FED meeting:

I think that the Fed must reduce interest rates on federal funds by 0.5% at the upcoming session for the following reasons:

First, the markets changed their expectations for the level of future short-term interest rates. That led to a decrease in the yield of 10 yr and 30 yr US Treasuries. The decline in the yield of these key assets reflected, respectively, to lower interest rates on mortgages and higher share prices. That leads to an increase in consumer confidence and hence to higher consumer spending. Lower interest rates stimulate the housing sector and from an initial negative outlook for its contribution to GDP at the moment, the position looks relatively balanced. The current data seems to show how the economy is already working at lower interest rates and therefore the Fed has to adjust its current position.

Second, in the good years of the economic cycle, the central bank has to maintain interest rates at a neutral level. The policy should neither be stimulating nor restrictive, so the economy can expand healthily at its potential pace for a longer time. There are several estimates of the current neutral real percentage. Different models show that it is in the range of 0-0.5%. With interest rates on federal funds between 2,25-2,50 and inflation of 1,5%, this means that the current real rate is between 0,75% and 1,0%. This is restrictive to these neutral ratings. If the inflation rate was 2% at the time of the bank's medium-term target, then the interest rate would have been in the desired range. But after the unexpected and sustained decline in inflation, the Fed has to adjust the nominal interest rate downwards by 0.50%.

Third, because of structural reasons, the FED is very close to the ZLB. This suggests that the Bank's available instruments are quite limited to fight the next recession. When a central bank has many stimulating tools it can afford to wait. To see how the economic data will develop in the future. To gain further clarity about potentially adverse economic changes. But not when interest rates are close to the ZLB. In that case, the Fed should do the opposite and insure against any future risks. The Fed should ease more aggressively than normal to achieve more accommodation and reduce the chances of ZLB becoming stuck with unfavourable prospects for economic growth. They need to use their organic tools more efficiently or as President Jerome Powell said:

“…in a world where you are closer to the effective lower bound, it’s why—research kind of shows this—it’s wise to react, for example, to prevent a weakening from turning into a prolonged weakening. In other words, sort of, an ounce of prevention is worth a pound of cure. So I think that is a valid way to think about policy in this era.“

One of the leading criticisms of the Fed in the previous crisis is that it has cut interest rates too slowly. This is because the economic models the bank used back then. They could not foresee what would be the effect of the credit collapse. Also, how it would affect the real economy. As a result, the FED did not use the interest rates efficiently. Then when the crisis worsened they had to rely on non-standard instruments with far less stimulating effects than the standard ones. According to many observers, this has left a deep mark on the current policy-makers. At the current moment, there is slow growth in investment spending, which is mainly due to the great uncertainty surrounding trade policies. In the future, this may lead to fewer new factories and, as a result, to fewer new jobs, weaker economic growth and lower consumer demand, and this is not a market characterized by a large inflationary pressure from manufacturers. As Milton Friedman said, monetary policy has an impact on the economy and inflation after "long and variable lags". The Fed must act earlier and decisively.

Finally, the Fed is at the threshold of a key for its future strategy decision. Most likely in the year 2020, the bank will move to a strategy that will allow inflation to consistently exceed the 2% target. That will happen in periods when the economy is expanding. Thus it will offset earlier periods when inflation was below the target of the bank. The goal is to create higher inflationary expectations across society. One of the important shortcomings of this strategy is that the Fed has to convince the general public into this commitment. That's why it is very important for the Fed to succeed in exceeding its inflation target during this business cycle. To show that 2% is not a ceiling. This can not be achieved with a small adjustment to the current interest rate. In fact, the policy of small and gradual interest adjustments is appropriate when the Fed aims to increase them when the economy expands and wants the effects of its political actions to go unnoticed. But when you try to avoid serious adverse events as well as risks associated with economic prospects combined with interest rates very close to the ZLB, decisive actions are more likely to be effective than the precautionary steps.

As you can see he thinks that the U.S. Central bankers will cut big, with 0.50%. This certainly is against the consensus which suggests (refer to the infographic above) that there is a 20% chance for this to happen. Still, he expressed his arguments on this. Read them and decide for yourself if you want to join “50bps cut” group. If you are crazy about FED or other Central banks I suggest you join Peter's Facebook group called FED and ECB watchers.

I think that now we'll see 25 bps cut and later this year will have another cut.

First of all, I think that December's rate hike was a mistake. I've said it before and I still believe it now. It was totally unnecessary. The market judged it the same way by falling 20%. FED did the right thing to stop raising the rates but I little bit late.

The following chart from the Federal Reserve bank of St. Louis shows the relationship between the Effective Fed Funds Rate and the 2-year T-Note yield.

Every time the EFFR got above the 2 YR T-Note yield a rate cut was due. Actually, if this rate cut is delayed for too long, a recession occurs. Making it a good predictor of an upcoming recession. The good news is that if the central bankers cut now it won't be too late.

Now, the person from whom I've learned this- Tom McClellan said that this chart actually suggests that 50 bps will be needed. But 0.50% will be too much for the current state of the economy. GDP is still growing above the forecasts and the earnings so far were not that bad as was expected. Unemployment numbers show no need for a rate cut.

That is why I think that 0.25% now and another 0.25% later this year (probably October or December) will be sufficient to waive off the negative effects of the global slowdown and USA-China trade dispute. It will also satisfy President Trump's ambitions for a second mandate.

How this will affect your trading?

There are 3 possible outcomes from the FED’s meeting:

Now to the actual trading positions.

My work suggests a possible short-term down move in U.S. Stock indices. That is supported by my view of 0.25%, no surprise, cut and the distribution which can be expected before or after this decision. Again, this is expected to be a short-term move, only a few days, not a serious decline. It won't lead to a bear market because the next recession is not coming soon (my recession indicator is showing 24% for a third consecutive week).

Following this, I am short Mini Dow futures since Thursday (see the chart below).

There is a small profit right now. I expect Monday to begin with a move towards Friday's high. If that attempt to break above it is unsuccessful the falling below Friday's low will probably trigger further distribution before FED's meeting. There is also a seasonal influence on the downside. Check the chart below. The blue line is a seasonal indicator courtesy of Larry Williams. 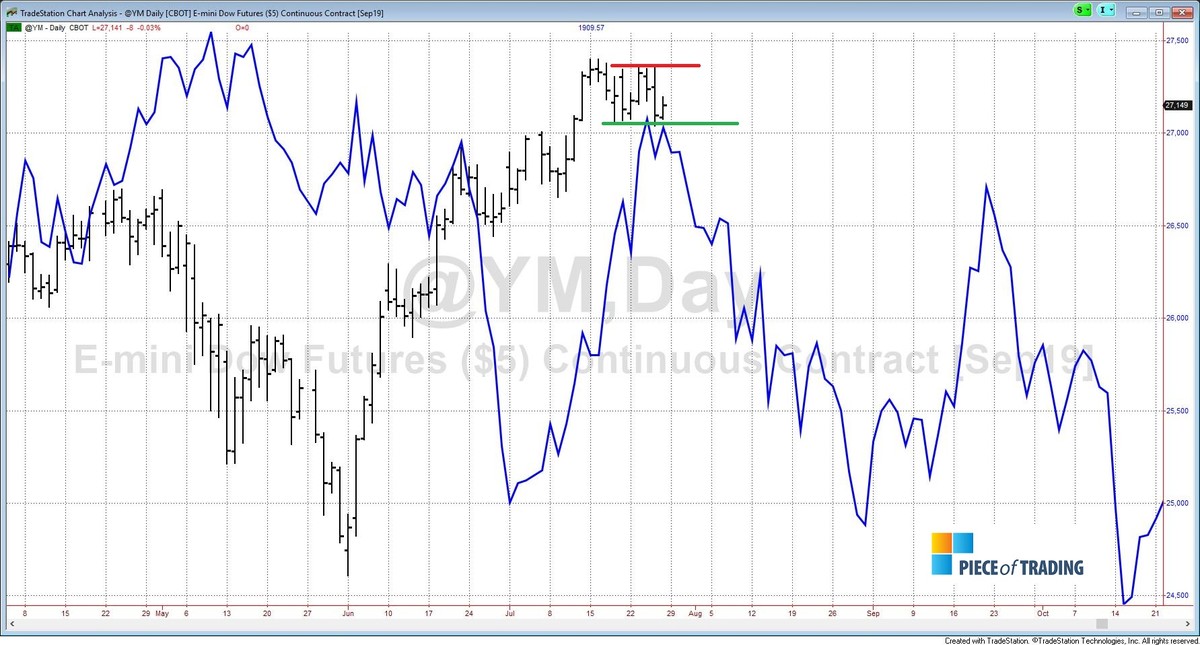 Latest COT data suggests a possible short in precious metals. It is very clear in Silver. But Gold is weaker. I don't see an entry signal but will look for it. Have in mind that those two instruments are with large public participation at the moment. Probably that is why had so strange pattern in Gold last week – inside day followed by outside day then again inside day, outside day and ended with the inside day. Such swings in both directions with no follow-through look like a stop hunt to me. Many positions are being eliminated before the actual move begins.

Having in mind that we are having an interest rate decision this week a play in treasuries or currencies is always possible but I don't have any signals right now. Only Canadian Dollar on the short side (in FX it is long USD/CAD) but such move was suggested in the previous weekly piece and has already begun.

Consider all this, don't rush into a trade just because some volatility might be expected and you want short-term profits.