Massacre in CAD, fast reverse in the indices and the beauty of the short-term trading. Weekly Piece

Massacre in CAD, fast reverse in the indices and the beauty of the short-term trading. Weekly Piece

So we've entered the earnings season and immediately got a correction in S&P500 index?!? It is really nice to be a trader :)

I was able to close my long S&P 500 position and guess what... I reversed it in Russell 2000. My work suggested a short setup was developing. The signal was very clear in Russell 2000 futures and that index is the weakest in the complex. That is why I entered short. You can see my position in the chart below.

I've started to move my stop down. I have placed a target on the previous bottom. But you can ignore it. I doubt that I will hold it that long. When a short-term position is against your longer-term views you either do not take it (wise thing probably :) ). Or if you are crazy enough, you take signals in the opposite direction. But don't expect a miracle to happen and be ready to close it fast.

Considering Friday's price action the most probable scenario is to see an up move on Monday. If it is strong, I will close the position. A lot of big companies will report this coming week. A piece of good news in an uptrend can quickly lead to new all-time highs.

Speaking of all-time highs my recession indicator is again showing 24%. I am working on to create a special page for it where I will give more info about it. Stay tuned, it is coming... the page I mean, not the recession.

My other positions from last week: British pound future short – target hit, Copper – took a beating there (my account did)

Now let's look what's ahead and find some trades for the coming week.

Last week I've noticed that setup is forming in Canadian Dollar future contract. All Forex traders should have in mind that the pair in FX is USD/CAD so if I am saying CAD down that means USD/CAD up.

I couldn't find an entry because of this strange price action that we had. Double outside bars. The first one on Thursday, followed by a bigger one on Friday.

The setup was confirmed by the COT data which suggest short sells are to be taken but those outside bars are mixing the picture quite a lot. So lets first focus on them and find do they mean something.

Not that common thing to see two consecutive outside bars. So I went back in history to see how CAD performed after such a combination.
I thought 5-6 years of data would be enough so I've started my research from July 2013. Unfortunately, I found this pattern only 4 times in that period. That is nothing. Then I changed the start date and since 2002 (excluding the current one) I found 17 double outside bars.

The statistics aren't giving much info though. What I found is that in the first few days after the pattern the market is more likely to follow the direction of the first outside bar. In our case, this is UP. But large moves came in the direction of the second outside bar which is a down bar in the current situation. Anyway, with 17 occasions and close results, there is nothing significant.

What this pattern means is that orders above and below were filled and stops were cleared. It also brings too much attention. Traders everywhere are probably talking about it “hey, did you saw the massacre in CAD”. They say that you catch more fish in muddy water and what we see in Canadian Dollar sure looks like muddy water.

Having in mind the setup mentioned earlier in combination with the double outside bar chaos, upcoming seasonal weakness and divergence – a clear sign of distribution (see the chart below) I will look for short signals. 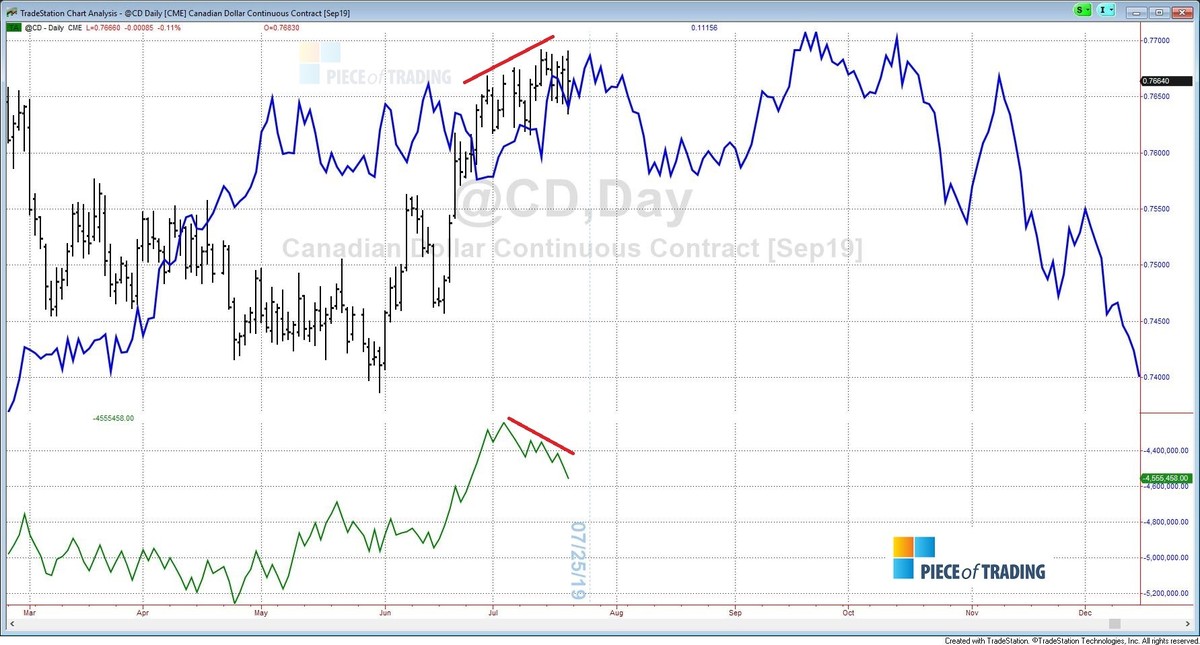 Price action suggests that the immediate move will be to the downside, towards the low of the biggest outside bar. That doesn't provide a good risk/reward opportunity. Especially if the market opens with a gap down. There is some time until the weakness in seasonality kicks in. So better will be to wait for a few up days then probably we'll see a good short signal. Breaking above Friday's high makes this scenario invalid.

Besides the Canadian Dollar, the COT setup appeared in two more instruments. Those are Silver and Platinum. Since I don't know why Silver is having such a large move up, I will focus to find short signals in Platinum.