What is next for Bitcoin? The moon or the bottom of the ocean? Daily Piece.

What is next for Bitcoin? The moon or the bottom of the ocean? Daily Piece.

Interesting news was released today A post on Facebook by no one else but its founder Mark Zuckerberg. That made me revisit a blog post from the past about the Bitcoin (Is Bitcoin going to the moon? 15 May 2019)

He is speaking of how 27 of the most powerful organizations in the world are going to create a new currency called Libra. Yes, a cryptocurrency and yes, it will use blockchain.

It is hard to answer this but think for a moment how many cryptocurrencies are needed in the world today? Maybe 5 or 10, 100, what about 1000? Just for information in the world right now there are around 180 fiat currencies.

Back to the question, well, if you ask me I would say “low range two digit number” I just don’t see what can justify the existence (and survival) of more.

Right now there are around 1600 cryptocurrencies in the world. It is normal because everyone is fighting for a dominant position. But when a giant like Libra (it is expected to be a giant) is entering the crypto world you can bet that this number will be significantly reduced. People will use only a few cryptocurrencies. Libra will attack Bitcoin in those areas where it is being used significantly. Such as countries with hyperinflation or difficult access to banking and others. Also, if all those organizations are fully adopting Libra you can imagine how many people will have access to that new cryptocurrency. It will be very easy for all those people to buy things using Libra.

All this creates a negative fundament for Bitcoin.

Imagine you have bought a cryptocurrency believing that it will last forever. Then suddenly a new one appears which has the potential to replace yours?  What do you do (if you are powerful enough)? You hype it up, lift up the price and wait for the crowd to come. Then distribute or said in another way exiting your position by selling to all those who rushed in to buy. That happens to a lot of stocks which prices are driven higher right before they fill Chapter 11- bankruptcy.

That is how the Bitcoin chart looks to me right now. Especially with that second break above the 9000 USD on low volume.

In my analysis dated 15 of May 2019 I suggested that consolidation is possible and marked the zone 9000-10000 as very important. So far BTC future prices were in the range between 7500 and 9000 for a month. Until yesterday when it broke the high on low volume and indicators showing distribution (See the chart below) 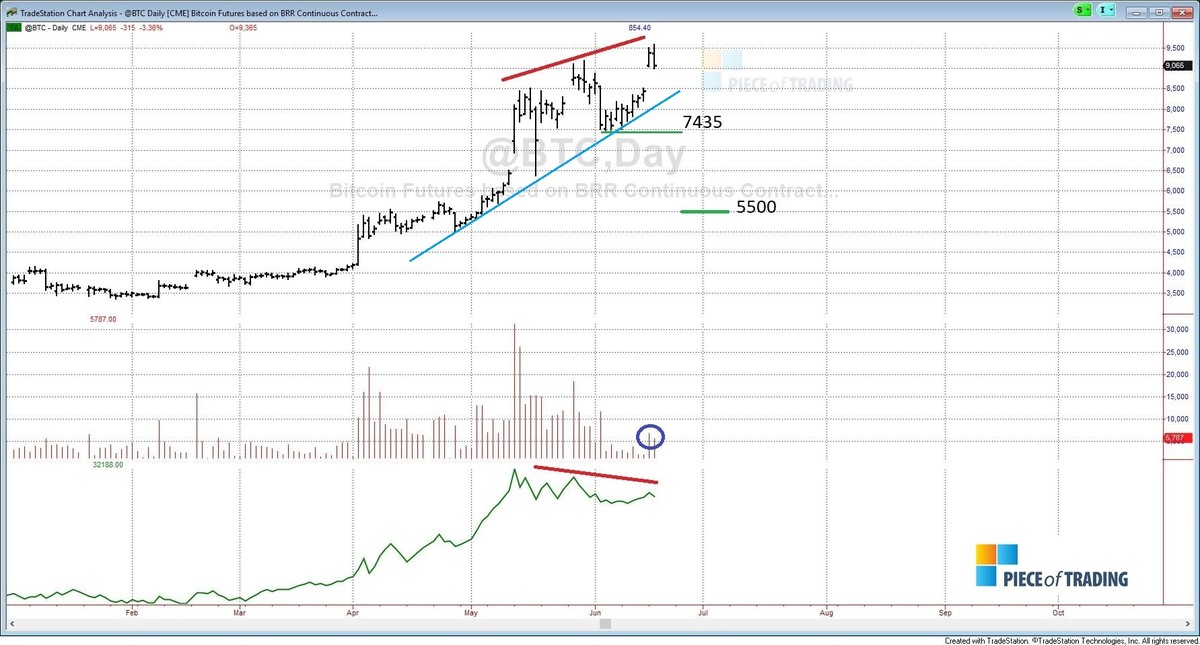 All this along with the negative fundaments for the BTC creates an opening to the downside.

Now before we continue with ideas on how to play this potential decline, let’s pause for a moment and consider a few things:
- According to Zuckerberg’s words, Libra is to be expected in 2020. Still, it does not exist and we don’t know for sure what this cryptocurrency will be capable of.
- If all goes as planned Libra will be the 800-pound gorilla in the cryptocurrency market BUT that does not mean that Bitcoin will disappear! My reading of the current situation is bad for the BTC but what if after one month a connection of some kind between Libra and Bitcoin is announced?
Those two points are worth considering.

Now to the actual trade. If a big player (I believe in the crypto world it is called a Whale) is looking to create a wave of buying it can cause a break above the previous top. But in case of the BTC future, such Whale is better to focus on a whole number level with some significance. Like the 10000 USD level. Why? Because most crypto traders are not that familiar with technical analysis. While in other markets a break above the previous top is significant for bringing buyers, cryptocurrency traders will be engaged better with a level such as 10000 (it is easier to explain that a break above 10K will clear the path to the moon than to explain how weeks ago there was a top around 9180 which if broken....)

All this means that there might be attempts to reach 10000 level.

Excluding everything, it is still not wise to jump in front of the coming train. BTC is in an uptrend and we have to take this into account.
So we need a trend change or a lower short-term high. On the picture, you can see a trendline which if broken can give us a signal for an upcoming decline. Also, selling can be considered below 7435. The soft target for the sells -> 5500

That's it for now. I'll keep an eye on the BTC situation and for sure will look for news about the new cryptocurrency.