Up or Down? Bullish or Bearish? Weekly piece. Educational piece.

Up or Down? Bullish or Bearish? Weekly piece. Educational piece.

Trade dispute brought another down week for the US stock market. Nasdaq and Russell 2000 made new lows while S&P500 and Dow hold above their lows from a week before. The reason for this might be that more companies of S&P500 are showing better than expected results (earnings and revenues) compared to the total stock market.

So what now? Are we going up or down?

Let’s see. We are late in the cycle, but the US is still growing. With current economic conditions, the US can fall into recession only if there is an interest rate increase. But so far no suggestions that FED is going to do that this year. So no recession this year.

Then if this is only a correction, how low can we go?

Charts of S&P E-minis might have something to say about this. We saw a big decline on Thursday powered by the upcoming long weekend. Three days is a lot of time for a tweet or something else to happen :) Especially if the market is closed, and you can’t do anything to protect yourself. So usually when there is uncertainty, an upcoming long weekend forces market participants to close positions. 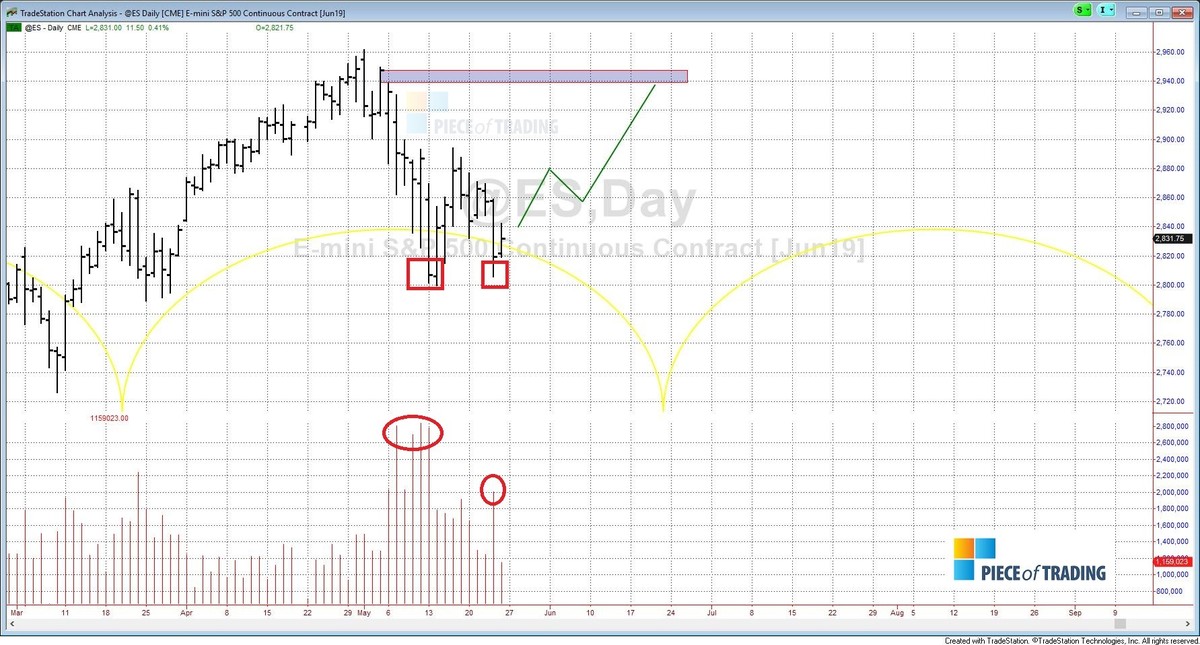 Thursday’s decline also brought an increase in the volume. The volume was larger than the previous day. It also marked a second time during this correction when the market reached the same level with an increase in the volume. That usually is a signal of a bottom.
Again, market internals are steady, and I can’t see significant signs of distribution.

My interpretation of those, if something does not happen during the long weekend, is bullish.

First, we need to take out Thursday’s high. Then soft target 2938-2947. Russell is still the weakest of the major indices so it can be used for shorts if S&P could not break above the Thursday’s high and there is bad news about US-China deal.

Another way to approach this situation might be if a person searches for companies, which are staying above their all-time highs or newly reached 52-weeks high after last week’s corrections.

Memorial day is bringing us a lesson. During holidays when markets are fully or partially closed we must be very careful with any signals given on the day, one day before and one day after. I tend to ignore such signals. For example, on Tuesday we could easily see a drop below or rise above Thursday’s bar. In normal days that might give us an entry signal. However, if it happens on the day after the holiday (Tuesday) I would wait for a pullback and then enter preferably in the direction mentioned above.

Interesting is the situation with the Canadian dollar. What is happening there requires attention.

Below is the chart of Canadian Dollar continuous contract. 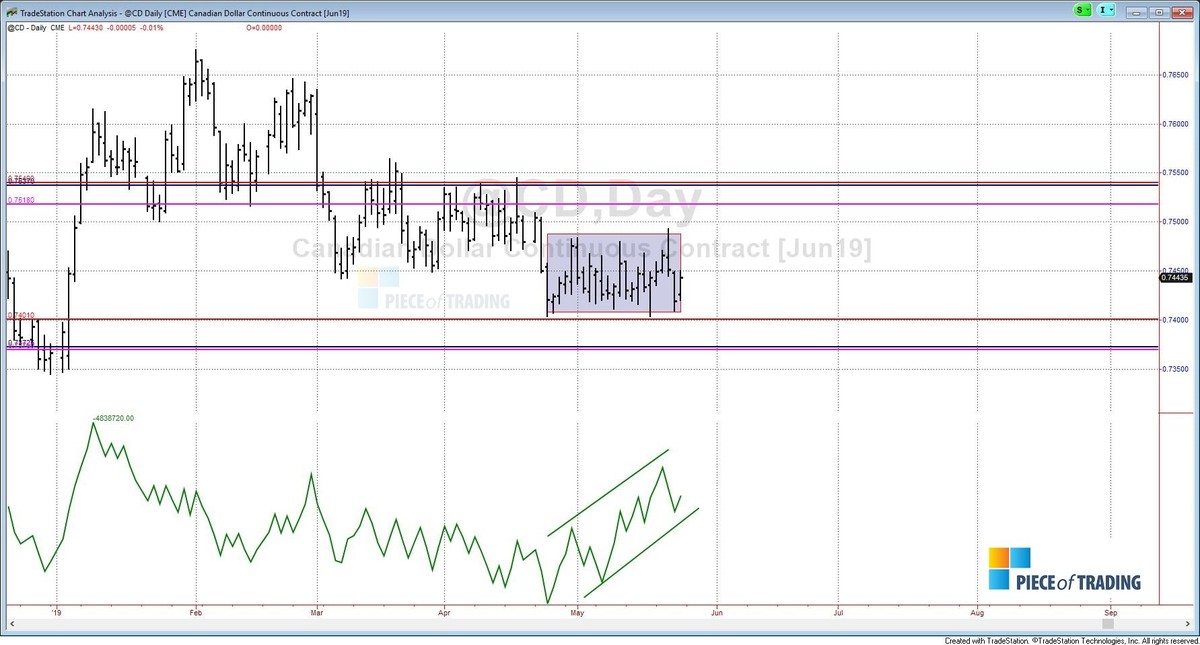 At first glance nothing special. The Canadian dollar is engaged in sideways movement and seems to be going nowhere. But the indicator below is telling us another story. It shows that while the Canadian dollar is staying in a narrow range the accumulation is picking up! On top of that, we have a seasonal influence which is indicating that the Canadian dollar can strengthen in the last days of May. The only thing that all of this means is that the probability of CAD breaking the range to the upside is larger. This can be used to take buy signals if a complex signal appears.

I've applied an interesting technique to the chart of the Canadian dollar. It shows 6 horizontal lines. There are two blue lines, two are red and two are pink. Those lines are support & resistance OCO (one-cancels-the-other) lines. Shortly this means that if a red line is touched by the chart the opposite red line must be deleted. The same with the blue and pink lines.

Currently, the red support line looks like the most important because it is stopping the market. Because this line was not touched on many attempts and the increased probability to break the range to the upside that could mean that we are heading toward the upper red line at 0.7540.