Is Bitcoin going to the moon?

Is Bitcoin going to the moon?

Bitcoin above $8000! Wow! Can this be the beginning of a huge move toward new highs?

Maybe but I am not that convinced. I am not much of a Bitcoin trader but since the BTC future contract was released on CME I’ve started to monitor its movement closer.
It kind of amazes me how techniques which were used 20 years ago on other futures (which don’t work any more on those futures) are working very well in Bitcoin. Very interesting.

OK, now to the point. A few days ago I saw in the social networks a very interesting comment which was something like:

I can’t remember the source or who wrote it but I was immediately drawn to the Bitcoin chart to see what is happening there. I knew already what was the situation in the stock market but when I pulled out the BTC future chart on my screen; I was stunned.

A couple of thousands of dollars and over 30% move for a few days! Who would not be stunned? But that is not what I have in mind.

When I saw this gigantic movement, I instantly knew I have seen it before. Many times in other trading instruments.
Immediately a question appeared in my head “Can this be a… short squeeze”?

C’mon, is it really possible for a cryptocurrency to be short-squeezed? I had to dig deeper.

The first step was to compare the Bitcoin chart to the last significant short squeeze. I didn’t want it to be a chart of a single stock. Commodities somehow seem to be more similar to Bitcoin. Then I’ve remembered of a short squeeze in Natural Gas. It took place in November last year and grew famous because it literally wiped out few hedge funds.

I’ve played with the charts a little bit and was able to combine NG and BTC together. The idea was to compare the NG’s short squeeze to the current situation in Bitcoin.

Here is how it looks: 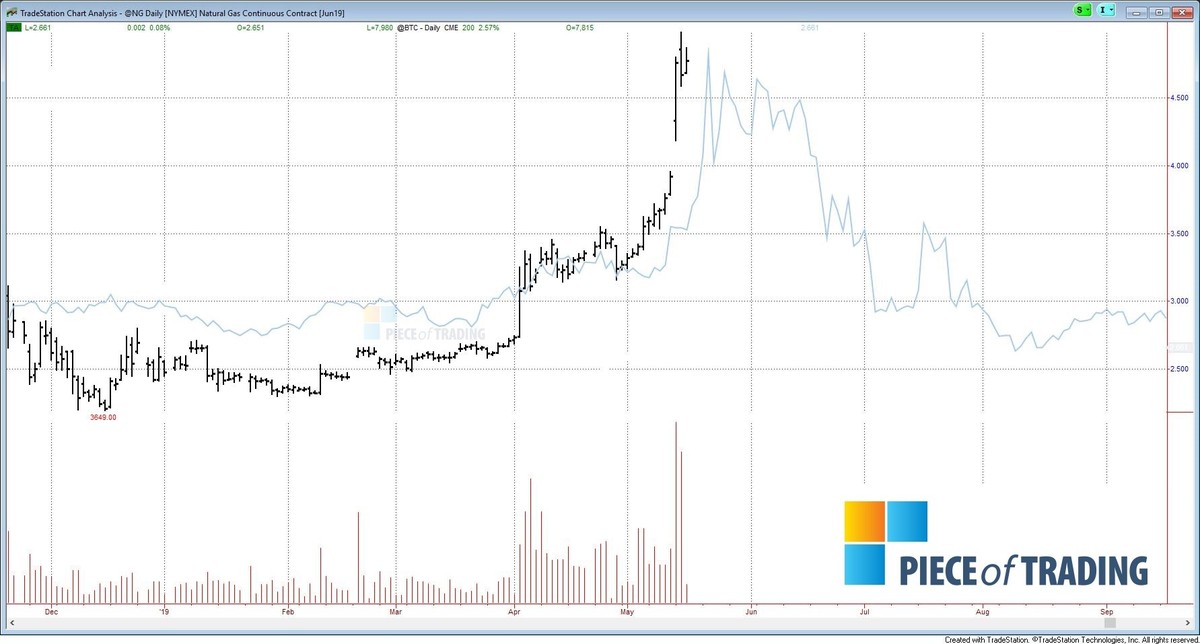 Except for how long it takes to happen, all those characteristics are true for all the short squeezes. No matter what is the instrument. Actually, for other instruments, we have a measurement of the short interest (very useful in stock trading). This way you can see that there are a lot of shorts which just waited to be squeezed.

It really amazed me to see that there is such a measurement for Bitcoin. Well, it does not show data from all exchanges but still, it is good to see that crypto trading environment is improving.

After that steep decline in the crypto world since the beginning of 2018, I can imagine a lot of traders were closing their longs (taking losses) and went short on margin to make up for those losses. If that is true it would result in a significant increase of the shorts around the bottom.

But let’s look at what the chart has to say about it.

Here is how the shorts look till today (BTCUSDSHORT by Bitfinex, courtesy of TradingView.com) 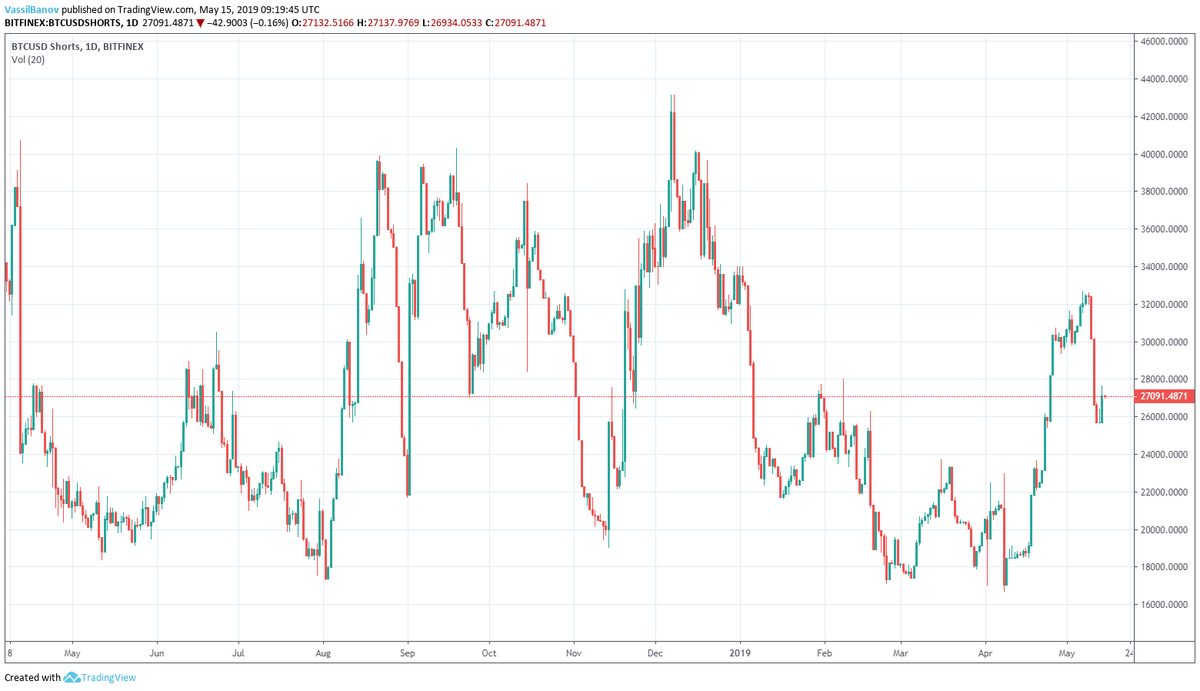 As you can see from it the shorts in Bitcoin were increasing until the 8th of May when the potential short squeeze began. After that, blown away by the rapidly increasing price traders liquidated their short positions and the short interest fell down.

Now back to the question “Can this really be a short squeeze situation for the Bitcoin?” If it was some other instrument like stocks or commodities, I would have said: “yes it is”. But for a cryptocurrency… who knows. One thing for sure, it certainly looks like a short squeeze.

Let’s assume it is. What will happen next?

Look at the next chart: 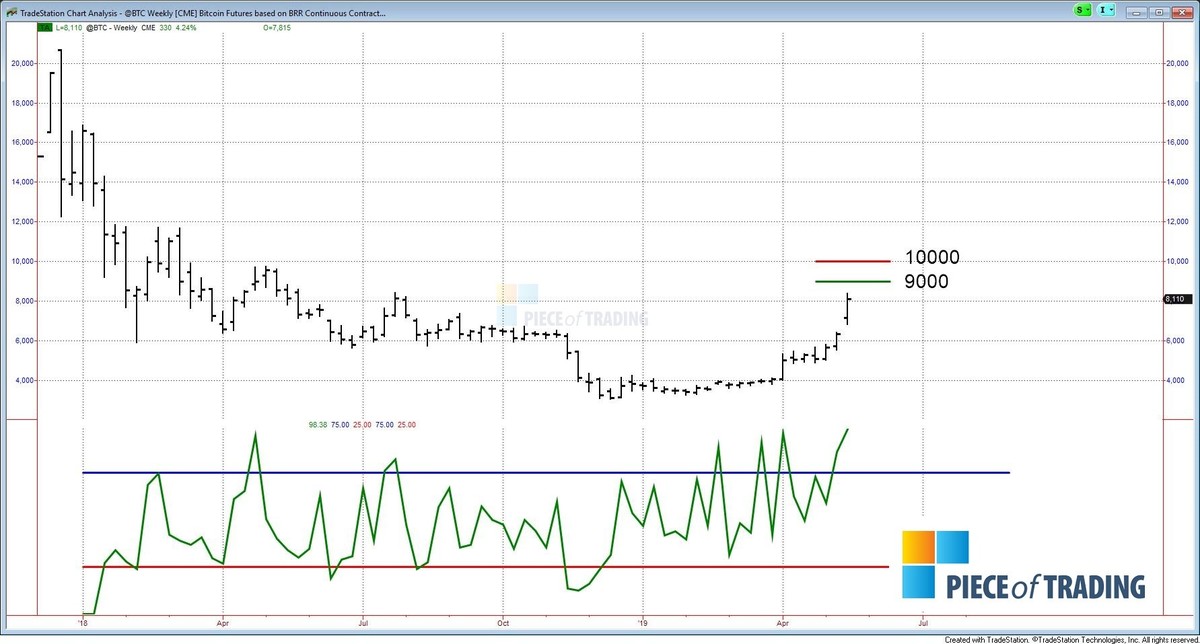 It seems that BTC can continue to go up toward 9000-10000 USD area. The green line below the chart shows a sentiment indicator developed by Larry Williams (ireallytrade.com). Above the blue line means too much buying. Having in mind that this sentiment is close to its highest reading ever, the 9000-10000 zone looks like a reasonable target for this move. Around those levels what should happen is the prices to hold in a tight range like what NG did (see the first chart). After that, we should look for the downtrend to resume itself.

All of this seems like a probable scenario for the “old” instruments but for cryptocurrencies... no guarantees, the future will tell.

I will continue to monitor the developments here and will write if I am going to take a position in this market. If you want to be notified please subscribe.